Medical Proof that the BioElectric Shield Protects Against Electromagnetic Radiation

You are here: Home1 / Blog2 / Health ~ Wellness3 / Medical Proof that the BioElectric Shield Protects Against Electromagnetic... 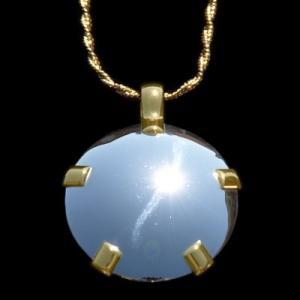 The Shield was Proven Effective by Independent Research

Alternative Medicine Magazine performed their own independent study of the BioElectric Shield. The study was for heart-rate variability. When the subject was exposed to a cell phone, “her sympathetic nervous system went into ‘fight or flight’ mode, producing the stimulating hormones cortisol and adrenaline and accelerating her heart rate. Then she put on a BioElectric Shield. Again she was exposed to a cell phone. While wearing the shield, the cell phone caused no change in her heart rate where before it had reacted “violently.” At the conclusion of their test, they report “Who would have thought it – those darned things seem to work!”

The BioElectric Shield is composed of a matrix of precision cut quartz (and other) crystals designed to balance and strengthen your natural energy field.

Since then, scientists have used natural crystals to reflect and redirect other types of electromagnetic radiation (like gamma rays). Modern science also has made extensive use of the fact that different crystals “resonate” at different frequencies. The first short-wave radios and electric watches were made of quartz crystals, because quartz amplifies and stabilizes only certain fixed frequencies of vibration. For the same reason, the first lasers were made from rubies.

The Shield strengthens your energy field in two ways: first, by deflecting and redirecting energies that impinge on you from your environment, and secondly, by reinforcing your own natural energies so they are much less susceptible to outside disturbances.

Since 1990, more than 12,000 people have been tested using the BioElectric Shield. In 2 studies, approximately 99% of this group showed a decrease in strength when exposed either to some form of electromagnetic radiation (a battery operated watch, cell phone or TV remote control) or when asked to visualize a stressful situation in their lives. After wearing a Shield for 1 minute or more, strength was regained. Applied kinesiology was used for this testing.

Overall, 10 different research studies, informal and formal, have been completed. Studies 3 and 4 were double-blind studies that ruled out the placebo effect, the original study by Dr. Brown and replicated by Dr. Yurichko. Studies 5 and 6 (original and replication) tested 45 patients for strength when they held a battery operated clock up to their body. 44 out of 45 people weakened. Still holding the clock, when the shield was placed on them, they all strengthened.

Computerized Acupuncture, study #7, showed that wearing a shield for 1-3 weeks produced consistent improvement among all subjects in their health profile. 50 different acupuncture points, representing the immune system and all major body organs and functions were tested.

In study #9, 50 individuals were asked to squeeze a finger dynamometer initially and than again after wearing a Shield for 1 minute. The average gain in strength was 24%.

In study #10, a portable EMG (electromyograph) was used to test muscle activity under 3 circumstances. Trial 1 – a baseline of muscle strength was established (muscle activity and pounds of force). Trial 2 – After subject sits 5 minutes in front of a computer, muscle strength dropped, on average, 16.8%, demonstrating a weakening effect on the body. Trial 3 – After subject wears a Shield still sitting in front of the computer for 5 minutes, strength was improved 44.6%. 21 out of 25 subjects were actually stronger on the third reading than they had been on their first reading. This shows that the Shield not only effectively cancels the weakening effects of sitting in front of a computer, but actually strengthens a person beyond their initial readings even under adverse conditions.

Visit the BioElectric Shield page on our new shopping cart for more information.

Who Are you Being & What Do you Believe?

Takara ShelorEnergy Healing Products & Tools with Your Clients in Mind!
Scroll to top