Love and Worthiness Lessons from a Wild Boar

You are here: Home1 / Blog2 / Health ~ Wellness3 / Love and Worthiness Lessons from a Wild Boar 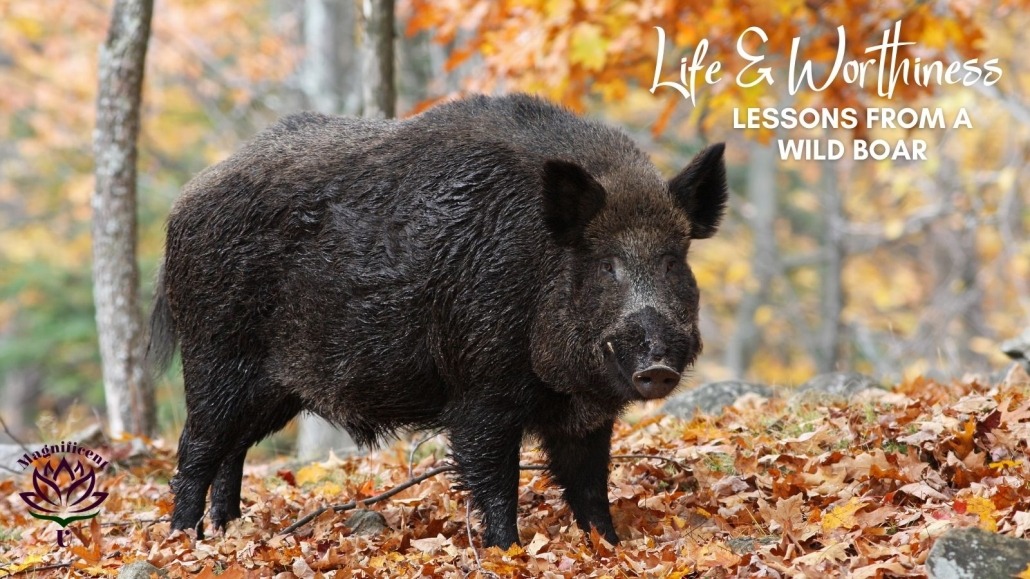 Long ago and far away … I had a visitation by a wild boar.

Now who on earth makes goofy statements like that? Seriously? Sometimes I think I am the strangest person I know.

Once upon a time back when I was first “waking up” from my slumber of forgetting who I really am, I took an extremely esoteric* class called Women’s Wisdom. During one of the weekend workshops we did a guided meditation** where you meet your “totem animal”*** for each of your main energy centers (chakras****).

We were at the part of the meditation for the heart chakra and I saw myself standing in a beautiful meadow full of daisy’s and all of a sudden appearing in the meadow with me was this wild boar. It was very angry. It snorted and began to charge at me.

I found the whole thing truly odd. Especially since all the other “totem animals” had been such sweet creatures – like the orca (largest dolphin) for my 2nd chakra.

And instead of getting upset and feeling afraid I just stood there looking at it – refusing to be intimidated by it’s very aggressive and rude behavior. It was highly offended by that too!

Anyway, after the “vision” part of the meditation was over, I received the insight about what it meant: “No matter how they are acting, all they want is love. Just like everyone else.”

That bit of wisdom is as true today as it was back in 1996 when I first saw the wild boar.

People behave oddly. They mistreat others. They sabotage their own happiness. They do a million wrong things. But in the end, everyone wants to be loved, accepted, and appreciated.

Remembering that helps me have more compassion for others – particularly when they are behaving in a way that is unkind.

And on top of that, there are the 3 deepest human fears we all have to contend with:
– fear of rejection
– fear of abandonment
– fear of unworthiness

We all experience some level of these. Usually one is stronger than the others.

Yet at certain times or in certain situations, another one will dominate. 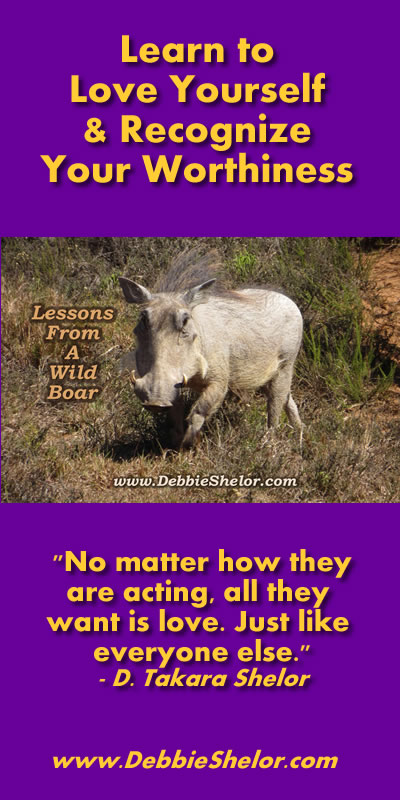 My primary fear has always been unworthiness.

Being reprimanded endlessly as a child and feeling like no matter how well I did, it wasn’t good enough, only helped make that one more pronounced.

When I tell people I’m an only child, they immediately respond with “spoiled.” And I just look at them thinking – “You have absolutely no idea what you are talking about. Try living under a microscope because there are no other kids to pay attention to and see how spoiled you feel.”

It has its up side though – I tend to excel at most things I do. I tenaciously go after what I want with a great deal of drive and determination. I did very well in school. I was the best dancer in my dance academy. I was President of the Institute of Industrial Engineers student chapter at Virginia Tech. It had 300 members. Yikes! That got me over my fear of public speaking. Another Plus!

I got a great job right out of college. I was selected to be part of a new plant start up when piles of other people from my company were clamoring for the position. I tied for best teacher / presenter when we ran all the people at the new plant through an intense training program. I won a Managers Award for Excellence for managing a multimillion dollar project and the resulting product being so good that it became the company standard worldwide.

Well isn’t that all peachy and aren’t I so grand?

Most of the time during the achievement of all that, I was so stressed out fearing that it was all going to go wrong, that I never enjoyed any of it. And in the end, I felt like a failure around most of those things. I should have done it this way or better or something.

The darn “shoulds” will kill you. Thank heavens I’ve moved beyond needing to do things to gain the approval of someone else and I’ve put most of the “shoulds” behind me.

Why am I telling you all this?

Because I’ve learned ways to get over it. And most people are still way too hard on themselves.

They spend so much time comparing who they are, how they look, what they’ve accomplished, how much money they have, even what their kids are doing, with others, that they don’t enjoy and appreciate their life.

And they fail to realize that the people they are comparing themselves with are as afraid and have as many flaws as they do.

We all have flaws. All of us. And we are all beautiful and magnificent in our own way. We all make mistakes. We all have weaknesses.

We all have strengths too.

I’ll never forget seeing an interview with Janet Jackson after she was given a 10 million dollar contract for something. It was a big deal back at the time – especially since she was a woman. Anyway, she basically said that even with all that she still didn’t feel like she was good enough.

Fear of being unworthy, undeserving, not enough.

You have to love and appreciate who you are before anyone else can.
You are the most amazing creature. There is only one of you in the entire Universe. You are fabulous.

So when you mess up – learn to laugh at yourself – or at least don’t be so hard on yourself.

When you observe yourself behaving strangely – getting upset or angry or afraid – over something silly, be more gentle with yourself and just realize its one of your beautiful little quirks. And then try to make it right with those around you affected by your odd behavior.

You are doing the best you can with what you’ve got. In the future, as you learn and grow, you may do things differently. But how you are right now is just fine.

And you are considered precious and are absolutely and unconditionally loved by God (by whatever name you choose to call the Divine Presence) just as you are.

Have a fantastic day,

* esoteric – “hidden” teachings or “mysteries” known only by a few who are enlightened or initiated
** guided meditations – gentle music is playing to calm your mind while a person speaks softly describing various scenes that you visualize in your mind with your eyes closed
*** totem animal – from native or earth-based spiritual traditions, an animal whose energy and qualities are there as your ally much as an angel or archangel would be.
**** chakras – the word comes from the vedic tradition and means wheel. Since the energy centers spin – which can be seen by some, felt by others and measured with a pendulum, wheel is appropriate. There are energy centers all over the body, but there are 7 primary ones. How “open” they are, the direction of the spin, and the magnitude of the spin, directly affects not only the functioning of the body, but certain aspects of life – money, relationships, etc. These same energy centers are addressed in healing all over the world. They are just most widely known by the term “chakra”.

How Often Do You Experience Joy For No Reason?

Takara Shelor Living Outside the Box
Scroll to top