Are You a Spiritual Warrior or a Metaphysical Wimp?

You are here: Home1 / Blog2 / Personal Empowerment Happiness3 / Are You a Spiritual Warrior or a Metaphysical Wimp? 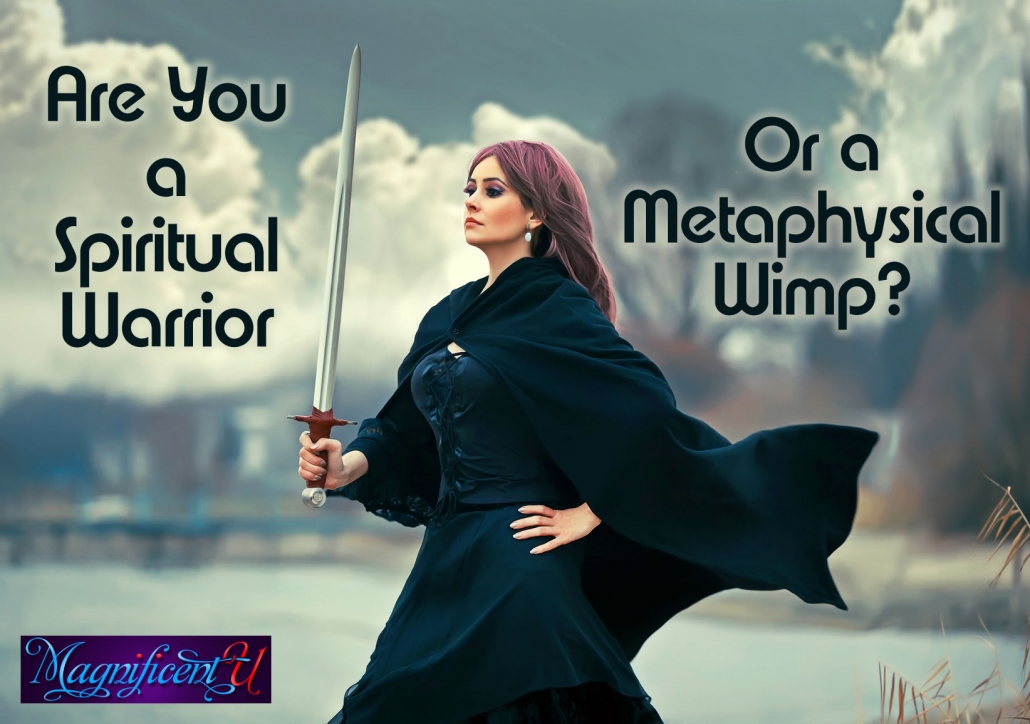 Our original plan was to be Spiritual Warriors.

We came from distant galaxies on a grand mission – to usher Planet Earth and all her inhabitants into the New Age. We held a beautiful vision of a golden age of love and light, where all beings from ants, to rocks, to humans, to lobsters would be honored for their gifts and for who they are.

We are, each of us, cocky rebels and rabel rousers. We actually thought it would be fun. Can you believe that? Well, maybe fun isn’t exactly true … but excited to come here for this moment nonetheless. Deep inside we are each a bit like Hans Solo from Star Wars. We like to do things our own way. We hate joining anything and taking orders, advice, or instructions from others. And we are also like the Three Musketeers. We actually enjoy the fight and it never occurred to us that we wouldn’t win.

Well, we were born. We became a tiny infant completely dependent on human parents, who basically had no clue. And we inherited their limiting beliefs and fears and then we took on a pile of our own. Life reflected back to us people and situations that proved to us that our beliefs were correct and we became depressed, co-dependent, addicted, obsessed, ill, obese, and our self-esteem spiraled ever downward.

In school we had to learn the answers the teachers wanted to hear – even if what was being taught was completely wrong.

If we asked questions that challenged societies beliefs, we were told to stop making trouble. If we questioned things being taught to us by our parents or through whatever religion we were born into, we were silenced … sometimes quite harshly. Heaven forbid if we shared that we could see angels, could astral project, or heard voices. That nonsense would absolutely not be tolerated. We shut down our curiosity, our genius, our connection to Spirit, and our joy.

Then we became adults with the same depression, co-dependency, addictions, obsessions, illnesses, obesity, and our self-esteem had not improved.

We went to college and chased after what our parents, society, the magazines and television said was the ultimate dream – an attractive partner/mate, a powerful career, a home, a fancy car, the right friends, the best vacations. Even if we managed to attain all that, we still felt empty and shallow. We still weren’t happy.

Finally one day something happened that was so awful we thought our entire world had been shattered. And it had. We were hit by the metaphysical two by four up side the head. Our soul was shouting: “Wake Up!”

So slowly and painfully we woke up to the fact that we were spiritual beings having a human experience and that most of what we believed was rubbish. We began seeking answers from books, friends, teachers, gurus, workshops, religions, massage, yoga, Reiki, and on and on. We did a million therapies and tried too many techniques to count, in order to unlearn everything that previously had been so important. We became workshop, book, psychic reading junkies. Unfortunately, many of us simply replaced the old junk with new junk and didn’t really improve our lives or our level of happiness at all.

Thankfully, some of us were actually tenacious enough to actually accomplish deep healing.

We grew. We evolved. We began to understand how manifesting in this dimension really works. We learned how to observe our life as we participated in it. We remembered that seeking happiness was important.

And then we got caught up in what we believed was the appropriate way to behave as spiritual people. We started shutting down our truth just as we did as children. We began to observe much more than we participated. We became loving and sweet and just allowed whatever happens to gently roll off our back. We dropped out of society and only spent time with the few friends that we could find of “like mind.”

We weren’t being Spiritual Warriors.

We basically WIMPED OUT.

I didn’t come here to be a nice girl, look pretty, and simply enjoy the sunset over the ocean, the Jemez or Blue Ridge Mountains every day (always a lovely view no matter where its from).

I (and you) came here to ROCK this place. Bust up the bull. Wake up the folks. Move this sucker (the earth) into the next dimension.

We came here to completely throw off the shackles binding us to mediocrity and help as many other people as possible do the same.

We can no longer worry about offending anyone. We can no longer sit on the sidelines saying that whatever is happening in Washington or anywhere else doesn’t involve us directly so we’ll just pretend it isn’t happening, manifest our own beautiful little reality, and ignore and allow whatever else is going on.

Ah, but now, those of us who have faced our shadows, healed our deepest wounds and let go of the anger, fear, judgment and hatred that we once held, are coming from a much different place – a healed place. We aren’t angry activist blaming others for all the problems in the world. We are stepping up and saying I am ready to be part of the change. We can see our lives and world events from a much higher perspective. We are not reacting or being run by negative emotion. We are in a calm, clear, wonderful place and we’ve decided to stand up for what we believe is in the highest and best interest of all humanity and this planet.

We are back in the world game.

Won’t you join us?

If you enjoyed this article, you might also like: In Pursuit of the Spiritual – Why We All Have to Become a Spiritual Warrior.

Takara Shelor Find Your Tribe, Like-Minded Friends, and Places Where You Belong
Scroll to top