You are here: Home1 / Project Peace by David J. Adams 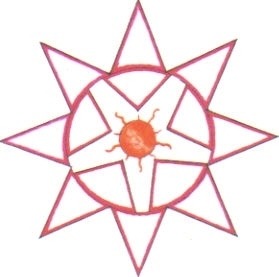 At the beginning of 2004, Beloved Sananda came through at an Eagle Lodge gathering and gifted into the hearts of all present a Pyramid of Peace. This Pyramid, when called upon to “Spin, Spin, Spin”, would radiate forth the Blue Light of Peace. We were each advised that we could pass this gift on to others in the same way it was gifted to us … which meant placing the hand over a person’s heart Chakra and asking for the Pyramid of Peace to be placed within their heart, then asking them to consciously ask the Pyramid to “Spin, Spin, Spin”

At the Eagle Lodge gathering on 8th August (8/8) in which we worked with the energy of the Lion Gate, Beloved Sananda again graced us with his presence, and again he came to gift us with a Peace Energy. On this occasion he indicated that we were now ready to work with the most powerful Cosmic Peace Energy, which was a fusion of Divine Love and Divine Peace. He therefore placed within all present a “ CRYSTAL OF DIVINE PEACE”, which, when asked to “Spin, Spin, Spin”, would radiate forth MAGENTA Light. Instead of placing this directly into the Heart Chakra, he situated the energy between the Heart and the Thymus so that it forged a link of Peace between our Soul (The Thymus being the seat of the Soul and direct connection to our higher selves) and our Heart ( currently the directing force, or pilot of our journey in the physical Dimension).

He reminded us that the “Crystal of Divine Peace” had been placed within the embrace of the Earth in Etheric form on March 20th 2000, as a result of the Marine Meditation wave of energy of the 24 hours preceding that, and situated above Chalice Wells, in Glastonbury, United Kingdom. This was the fourth Crystal activated as a result of Marine Meditation energies – the first three formed the Three Fold Flame in the hearts of Humanity (see Crystal Activations)

Although the CRYSTAL OF DIVINE PEACE was placed on the Earth in 2000, Humanity itself was not ready to work with it’s powerful energies. Beloved Sananda has indicated that Humanity is now ready to work with this energy and has asked me to urge as many of you as possible to place this energy within your own Beings and in as many others as possible. It needs to be placed between the Heart and the Thymus and asked to “Spin, Spin, Spin” it’s Magenta Light.

With the earlier two energies we were somewhat limited in our capacity to share, by the need for personal contact, however, with this latest gift from Beloved Sananda, we can work more globally because when the Etheric Crystal of Divine Peace was placed over Chalice Wells in March 2000 I was given a mental image of it which I drew at the time. It takes the form of an 8 pointed star radiating Magenta Light outwards to the Earth, with an inner 5 pointed star radiating Magenta Light inwards to the great Central Sun . I was subsequently told that the inner five points represent the five elements that make up the Temple of the Three Fold Flame.

I attach a copy of the image I was given in March 2000. Should you resonate with it’s energies of Divine Peace and want to be a part of radiating this within your own lives and within the lives of others, all you need to do is copy the image then physically place the image between your Heart Chakra and your Thymus Chakra and ask beloved Sananda to ‘Meld’ it into your Being. Then simply ask or command it to “Spin, Spin, Spin” within you to radiate forth its Magenta Light. It will continue to radiate this beautiful Magenta energy of Divine Peace as you go about your daily journey, but from time to time if you repeat the command to “Spin, Spin, Spin”, this will ensure that it is radiating at maximum power. Once you have ‘melded’ the image into your Being, you can always gift it to others by giving them a copy of the image and the instructions, or by placing your hand on the area between the Heart and the Thymus on their body and asking beloved Sananda, through you, to place the Crystal of Divine Peace into them. REMEMBER when you do this to always ask it to “Spin, Spin, Spin”.

The Image of the CRYSTAL OF DIVINE PEACE can be meditated with or used in any other way that is conducive to creating Peace upon this beautiful Planet of ours, you do not need to seek permission from me as I was only the vessel througb which the image came, I do not own it any more than any of you will own it. ENJOY AND SHARE !!!!