A Captive Orca Named Lolita and My Unwavering Need to Share Her Story with the World!

You are here: Home1 / Blog2 / Personal Empowerment Happiness3 / A Captive Orca Named Lolita and My Unwavering Need to Share Her Story with... 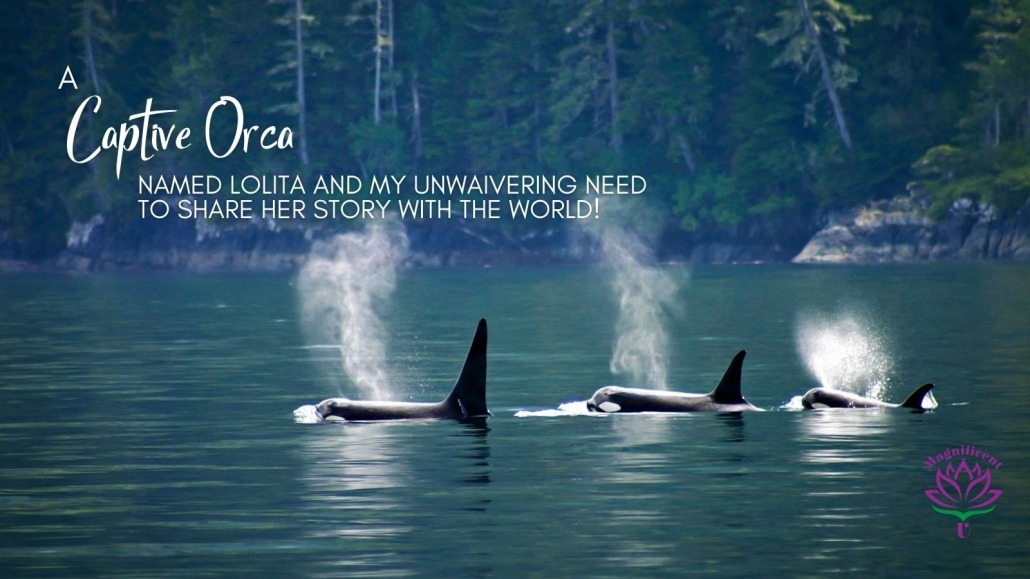 I knew it was going to be really hard to watch this video … but I did not anticipate the uncontrollable tears that seeing her from this perspective would bring. You probably won’t have the same reaction … I explain below why I did.

For those of you who are not familiar with my story … Back in 1995 or so I heard about Lolita. I was having a really rough time at work, the stress was much to much for me being a front line supervisor and engineer in a pharmaceutical manufacturing plant. A woman from the San Juans was putting together a compilation CD with big name stars like Olivia Newton-John (who loves cetaceans) to raise awareness and money about Lolita’s situation, to potentially get her released, transported to a sea pen back “home” near the San Juan Islands off Washington State, and retrained to wild (and free) if at all possible.

Dolphins had already begun to “come to me” in meditation. I was seeing and sensing their presence practically every time I closed my eyes. Soon after hearing her story and deepening my friendship with this woman, I began “feeling/sensing” Lolita’s presence. I mustered up the courage to leave the security of that high paying job and I moved to the San Juans.

Together, this woman and I set up a non-profit and continued with the compilation CD project. We decided that visiting Lolita was important. We hopped on a plane to Miami. We were the first ones in line to see her show. When they opened the gate, allowing us to all file in and find a seat, we literally sprinted up the sidewalk to her talk. Just as in this video, you can stand right next to her.

Unlike this video, Lolita came over to us … and she never left. She literally came to the side of the tank where we were and just stayed there. She stared right at us. Periodically she would dip her head under the water, but then she would come right back up and stare some more. I could have literally stretched out my arm and touched her. We didn’t dare though, because we thought they would have kicked us out of the show. My heart was exploding with love for this animal.

I have no idea how long this went on … it was a VERY long time. The trainers were all staring at us … this was obviously not “normal” behavior for her. She knew us and we knew her on some level. We had just left her home waters and family in the Northwest. And I had been feeling her presence for a few months before the meeting.  Even during the performance, Lolita must have been behaving unusually because throughout the show the trainers continued to stare and point at us.

When we met, she felt very much to me like a long lost sister I never knew I a had.

While we stood there staring at one another, I made a promise to Lolita to continue to tell her story and the story of all the other cetaceans in captivity. The co-founder of the organization is now dead. I feel compelled to continue this quest … one that may never find resolution with her gaining freedom … for as long as she is in captivity.

I know within my very bones that as long as we hold captive these magnificent creatures, we ourselves will remain in our own self-imposed emotional / mental prisons. We can never be truly free ourselves as long as we subjugate and mistreat others.

Seeing this video, from the perspective of standing there by Lolita’s tank, brought back all those memories flooding in. I felt as if it was that day oh so long ago when I was standing there staring into her eye, watching her dip her head in the water and then come back up to “commune” with me once more.

I send her and all the other dolphins and whales in captivity much love and support.

If you love dolphins and whales, then join my Facebook Group: Wild Dolphins Lovers here.

Stop Sitting, Start Standing for Health with DIY Stand Up Desk with Exercise...

No Amount of Physical, Mental, Emotional, or Energetic Abuse is Acceptable!
Scroll to top