September is for Cetaceans

You are here: Home1 / Blog2 / Dolphins Angels Whales3 / September is for Cetaceans 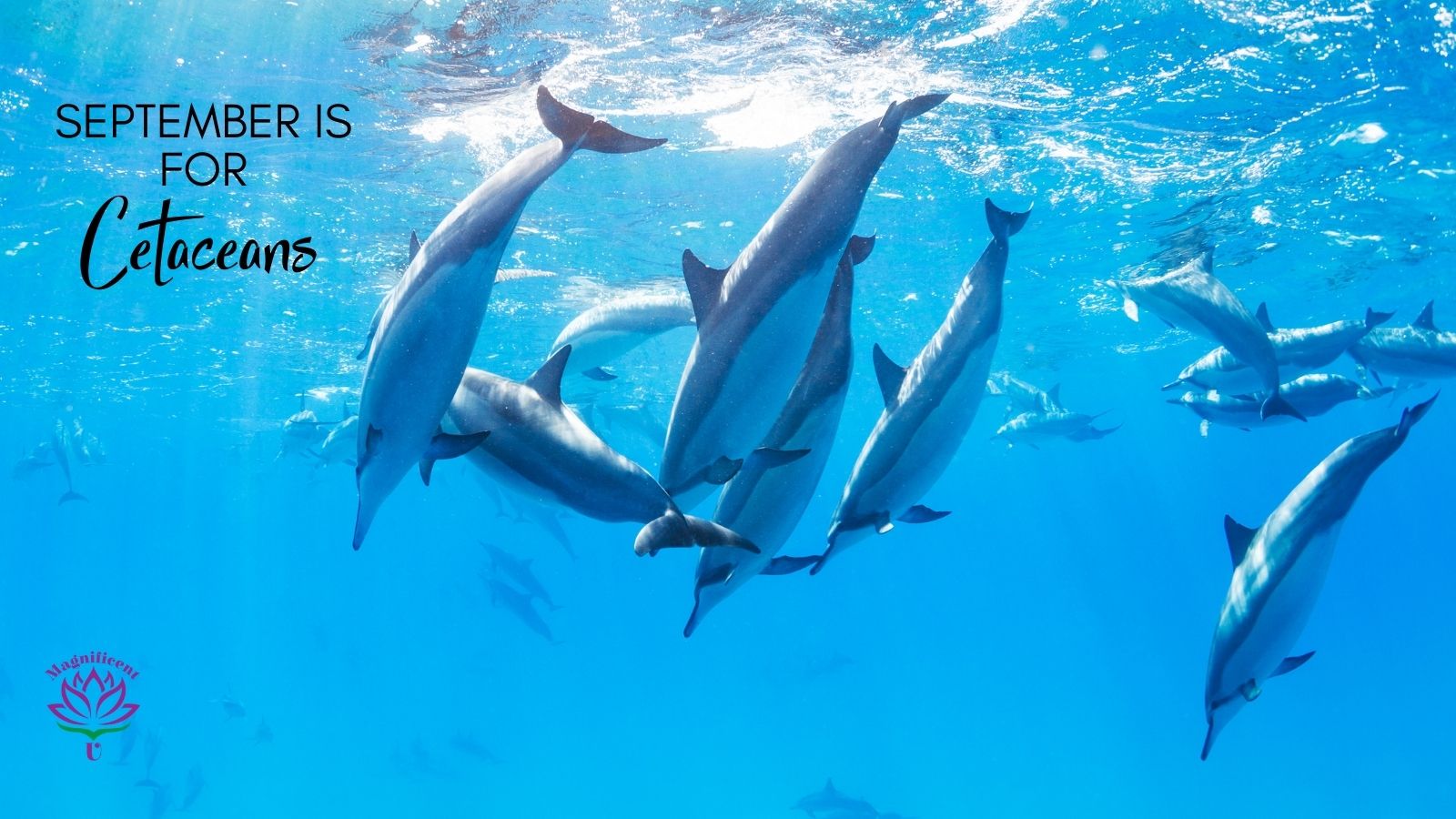 Every September I put special focus on cetaceans (dolphins and whales). As many of you know, they have had a truly profound impact on my life.

First, the dolphins came while I was doing a shamanic vision journey around a medicine wheel in my mind. I was just learning to meditate and this was a truly profound, life-changing moment. After that, they showed up pretty much every time I closed my eyes. The energy that came with each of their appearances healed the emotional wounds I was experiencing after remembering being raped when I was 18.
Fast forward only a couple of years. I met a woman from the San Juans at Stuart Wilde’s 8-day Warriors in the Mist training. She told me the story of Lolita, the beloved Orca from the Northwest who was ripped away from her family at a young age and sent to a concrete prison where she has been enslaved ever since in Miami. The story touched me at such a deep level, and for several other reasons, I quit my job as an engineer and manager at a pharmaceutical manufacturing facility, moved to the San Juans, and co-founded a non-profit with the woman who originally told me the story … with the aim of having Lolita rehabilitated to wild and returned to her family.
Right before I left, my dear teacher and friend, Karen Schweitzer, introduced me to her friend Dr. Marsha Green, Professor at Albright College and President and Founder of Ocean Mammal Institute. Dr. Green told me about the devastating effects of LFAS (low frequency active sonar used by the US military) and how damaging it is to our beloved friends with fins (and anything in the water I later learned.)
While living in the San Juans, I developed such a deep bond with the orcas that live in the water nearby, I began to be able to literally feel when they were near. I would just suddenly have this deep inner knowing that the orcas were visible from somewhere on the island where I lived. So I would jump in my car and drive quickly to the place I felt guided to go, park the car on the side of the road, scamper up to the top of the hill, sit down, and watch 30 or so orcas swim past.
Then I moved to Southern California and developed a similar relationship with a pod of dolphins there. I met my future husband. We moved to the top of Mt. Palomar, a very sacred mountain. It was there that I began hearing more and more about LFAS. Contemplating how it was impacting my beloved friends with fins (dolphins and whales), I sent up a prayer to the Universe asking what we humans could do to protect them.

The next morning I was jolted awake at precisely 4 am with the words to the Golden Water Dolphin Meditation for Planetary Healing burning in my brain. I wrote the words down as quickly as possible and knew it was to be done at Fall Equinox. I also had the inner knowing that it wasn’t just me alone who needed to perform the meditation if it was going to make a big enough difference. (Just as an aside – It was the first time I channeled a guided meditation. I’ve probably channeled a thousand or more since then.)
I knew Barbara Wolf had an announcement email list of global meditations people could join in on and I asked her if she would mind letting others know about this one. Her immediate response was that I needed to contact David J. Adams in Australia.
It didn’t take David and I very long to realize that we each had been given a very similar meditation to share with humanity. The meditations connect the participant with dolphin and whale conscious and help to raise all the consciousness of water everywhere on the planet. Since water makes up 70 to 80% of you, it raises your vibration as well. Beginning in 1998, we’ve been co-leading these global meditations every Equinox since. This is our 23rd year.
David still lives in Australia. I still live in North America. I almost got there 11 years ago when I was living on a yacht in the South Pacific, but the Universe had other plans. So, to this day, we have never met in person … but we meet often on the ethers. And, by participating in the meditations coming up at Equinox, you can connect with David and I on the ethers are well. Plus you get to connect with all the dolphins and whales all over the globe. And help us raise the vibration of all the waters on planet earth including the water inside of you.
Somewhere along the way I started a facebook group called Wild Dolphin Lovers. And by being the place where so many gather to find out more about cetaceans, I stay abreast of what is happening in the world related to them. That means the good as well as the very very sad.
Many years later, I felt an inner calling to put together a special book by dolphin and whale experts to share their unique stories of their deep connection to cetaceans. It was called Dolphins & Whales Forever and it became a #1 bestseller. That book has impacted many many lives.

“Downloading” from the Universe the Golden Water Dolphin Meditation for Planetary Healing was just the beginning of the transformational tools, training, and and technologies the dolphin-angels began sending to me in vision, dreams, and spontaneous inner knowings.
When they first showed up, they brought with them this an extraordinarily fine-tuned healing energy that is nurturing, uplifting, soothing, calming, etc. Its how my emotional wounds began to heal. After I learned how to do Reiki and began consciously channeling energy, I was guided to have a private session with some monks from Tibet. Using their fabulous copper and crystal healing technologies, the chakras on my hands and feet blasted open like never before and I was able to bring through more and more Light. I soon discovered that I could “bring in” the dolphin healing frequencies they had so lovingly brought to me in my time of need.
The more I tuned in to the dolphin-angels and meditated daily, the more amplified my inner knowing became. I felt guided to attend particular classes and read specific books. One of the courses I was guided to attend was a flower essence course with Star Riparetti of Star Flower Essences. It was fabulous. As soon as I returned home to Palomar Mt., every morning at precisely 4 am, I was jolted awake with a vision of a particular flower that I’d seen on my daily walk. By 6 am, I was out on the path clipping blooms and making an essence.
After several of them had been made, I was guided to hold each bottle, bring through the dolphin-angel frequencies and add sound to the essences. I connected with world sound healing pioneer, Jonathan Goldman, now a dear friend, for more insight on the sound healing portion of this new alchemy I was being shown how to create. He tuned in and consulted Archangel Shamael and shared with me the specific information I needed to proceed.

I called the new products Dancing Dolphin Essences. They were born in 1998, the same year as my son … whom I had at home in water with only his father present … dolphin sounds playing softly on the stereo.

Why Focus on Cetaceans in September?

So, yes, I’m deeply connected to dolphins and whales and they have had a huge impact on my life. But that doesn’t fully explain why I focus on them so much in September.
The reason is that beginning on September 1st, in a place known as The Cove in Taiji, Japan, the dolphin slaughter begins. They herd entire dolphin pods with boats into The Cove and then cull out a few young ones that they can sell to dolphinariums for human entertainment. The rest are killed. This slaughter continues for 6 months. Also, going on in the Faroe Islands sometime between July and September is what is known as The Grind (be careful clicking this link – the images can be deeply disturbing) where locals slaughter hundreds of whales, including pregnant mothers and juveniles.

One of the cetacean experts I invited to participate in the Dolphins & Whales Forever book project, Mary J. Getten, began offering a Global Water Healing Meditation every month. She invites water healing and cetacean experts to take turns leading the meditation. Since David and I already focus on dolphins, whales, and water healing on the September Equinox, it felt appropriate to guide the Global Water healing Meditation in September as well … as a way to honor those beautiful souls whose lives are so brutally taken.

To join in to these meditations, visit the Events Calendar at Magnificent U with Takara.