Learn to Receive When Magic Happens 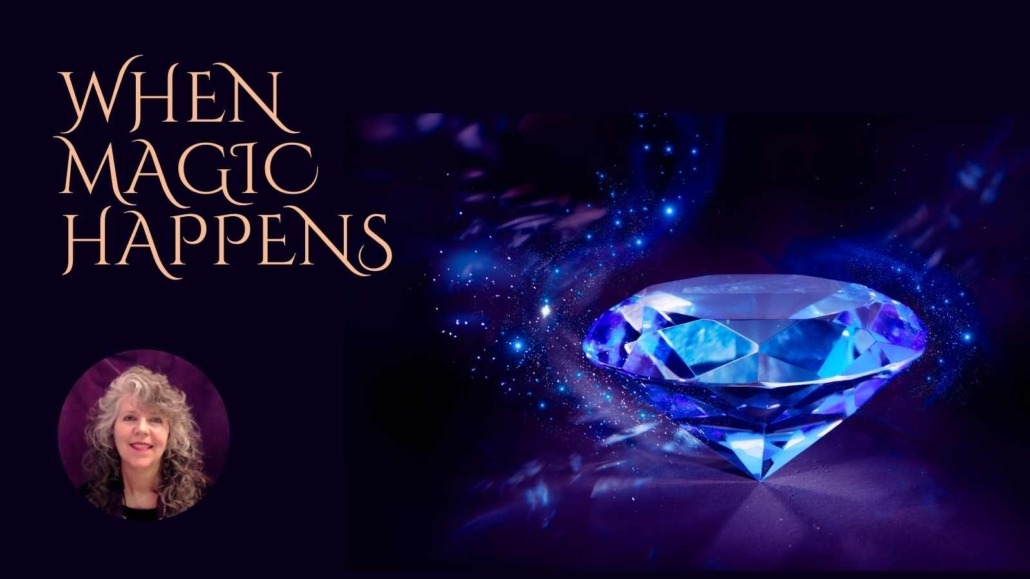 When Magic Happens … Learn to Receive

Many years ago I had a client named Paula. She was a beautiful Native American woman who became a dear friend. I guided her through a past life regression one day. And just as the regression was ending, she began to channel a prophecy for me. She said, “You are going to start finding gems, diamonds, emeralds, rubies, and more all over the place. They will just show up for you.”
At the time, that sounded ridiculous. I spent most of my days homeschooling my son, not working much, and my then husband was only working part time. We were able to pay our bills, but luxury items were not part of our reality. So the idea of gems randomly appearing seemed outside the realm of possibilities.
And then it began to happen.
I was on a hike one day way out in the middle of no where, looked down, and there was a gold earring. Thankfully, I had learned to receive.
Another time I found a gold watch. Once I found a tennis bracelet – you know the gorgeous thin bracelets made of gold with diamonds all the way around. Then there was another gold earring … this time with diamonds. Each time I found a gem or piece of jewelry, it was always in a place far from civilization, where there was no one to ask who it might belong to. It only took one or two of these experiences for me to realize how much more is possible if we just open our minds to the possibility.
One day a friend of mine stopped by the house. She had spent a LOT of money buying matching sets of gems in Santa Fe. She bought 9 matching rubies, 9 matching emeralds, 9 matching silver topaz …. and on and on with other gems. She said she had been guided to put together a powerful energy grid made of gems and needed 8 of each. She was to give all of them to me to make essences with – which I did of course – before she created the grid. She needed 8 stones for the grid and she was to give me the 9th stone from each set.
I remembered Paula’s words and just started to laugh. If Paula hadn’t told me gems would be coming to me and I hadn’t had the experience of other gems just showing up, I may not have been able to accept such an extraordinary gift. I might have refused or offered to pay her something.

Do you ever turn down gifts or opportunities because they seem like “too much?” Or possibly that insidious beast called unworthiness has reared its ugly head squashing your ability to receive. A different form of that shows up if you believe you have to give to receive or that giving and receiving have to be in equal measure.

Learning to Receive Through Precession

Buckminster Fuller taught a concept called precession. It says that if you give in front of you (the person in front of you), the Universe will give back to you from a 90 degree angle. What that means is, you give freely (as you are guided) and you will receive from somewhere else entirely. And the job is to accept the gifts when they come.
That also means don’t expect the people you give to (time, energy, money, etc.) to give back to you. If you are guided to give, then give. If you are not guided to give, then don’t. It’s just that simple. You have to be in a truly centered, balanced place to be truly Divinely guided.
Friends have continued giving me gems over the years. One of my friends, who is also a student, gave me a gorgeous amethyst necklace for Winter Solstice / Christmas one year.
Recently, I stopped in to say hi to a friend of mine who owns a jewelry store. In the middle of telling stories, he asked his assistant to bring in some amethyst for me to look at. He came back with 3 boxes of cut amethyst. I was drawn to a gorgeous oblong amethyst with a diamond in the center. He said, “pick one.” So I picked that one. Because of what he charged me to fix a piece of jewelry one time, it never occurred to me that he might give me a gem. I assumed he was about to tell me the price. Instead, he simply gave it to me.
The point of this story is to encourage you to believe in miracles, possibilities, and “gifts from the Universe” coming out of nowhere.
The more you believe, the more you accept the gifts, the more gifts come your way.
Remember to have fun with it.

P.S. You have to learn to receive. If you need help learning to allow better things into your life, set up a time to talk with me. Book a Diamond Within Breakthrough Session here SpeakWithTakara.com.

Return from the When Magic Happens Learning to Receive page to the Magnificent U Dolphin Energy Healing home page.

Negativity is the Destroyer of All Good Things