You are here: Home1 / Blog2 / Personal Empowerment Happiness3 / All Spiritual Paths Ultimately Lead to Love, Inner Peace, and Enlighte...
Even though there are numerous spiritual paths, many people hold strong convictions that there is only one path to God … and obviously that path is the one they are following.  It has been my experience that the higher you climb in consciousness and awareness … regardless of which of the spiritual paths your soul has chosen to help you get there … those paths all ultimately lead to oneness, inner peace, Divine love, and enlightenment. And I have met many following many spiritual paths that have gone far towards those ends.
I care not what path one follows … I care what’s in their heart. If they are kind, do their best to follow the Golden Rule, and are actively focused on growing and evolving as an individual, then they tend to be “my people.” And I have met many heart-centered people walking many spiritual paths. I look for those who have worked diligently to rid themselves of hatred, judgment, and fear … which taints and distorts everything they perceive, say, and do. Clarity and purity of mind, body, and spirit is a never-ending process. 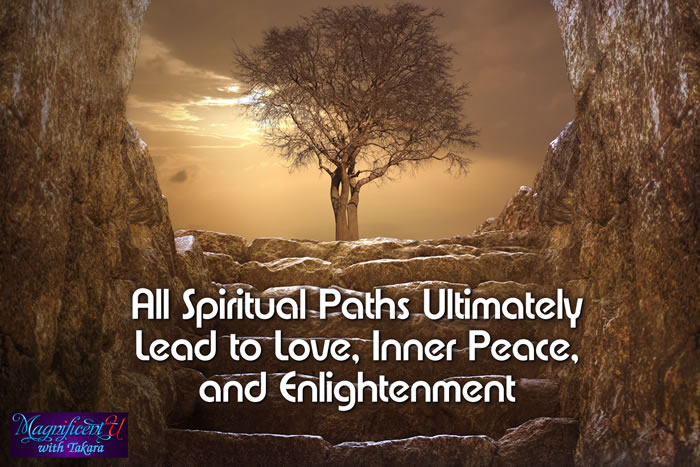 Hopefully by now you are aware of some of my various teachings. One of the things I often share are the 5 practices that can help you come into alignment and live what I call the Noble C’s (being calm, clear, confident, Divine connected, and courageous) in every moment. Those practices are:

When you do these things, you come into greater alignment with the truth of who you are, your own I Am Presence and allow the spark of Divinity that you are to direct your life … your words, your actions, your decisions.  From that place, you are “inspired” along your path.

Return from the Page: All Spiritual Paths Ultimately Lead to Love, Inner Peace, and Enlightenment to the Magnificent U Personal Empowerment and Spiritual Growth Home Page

Best Motivational Videos for Authors, Entrepreneurs, & Others Who Have...

Learn How to Improve Intuition with Takara
Scroll to top