A Special Relationship with Orcas

You are here: Home1 / Blog2 / Dolphins Angels Whales3 / A Special Relationship with Orcas 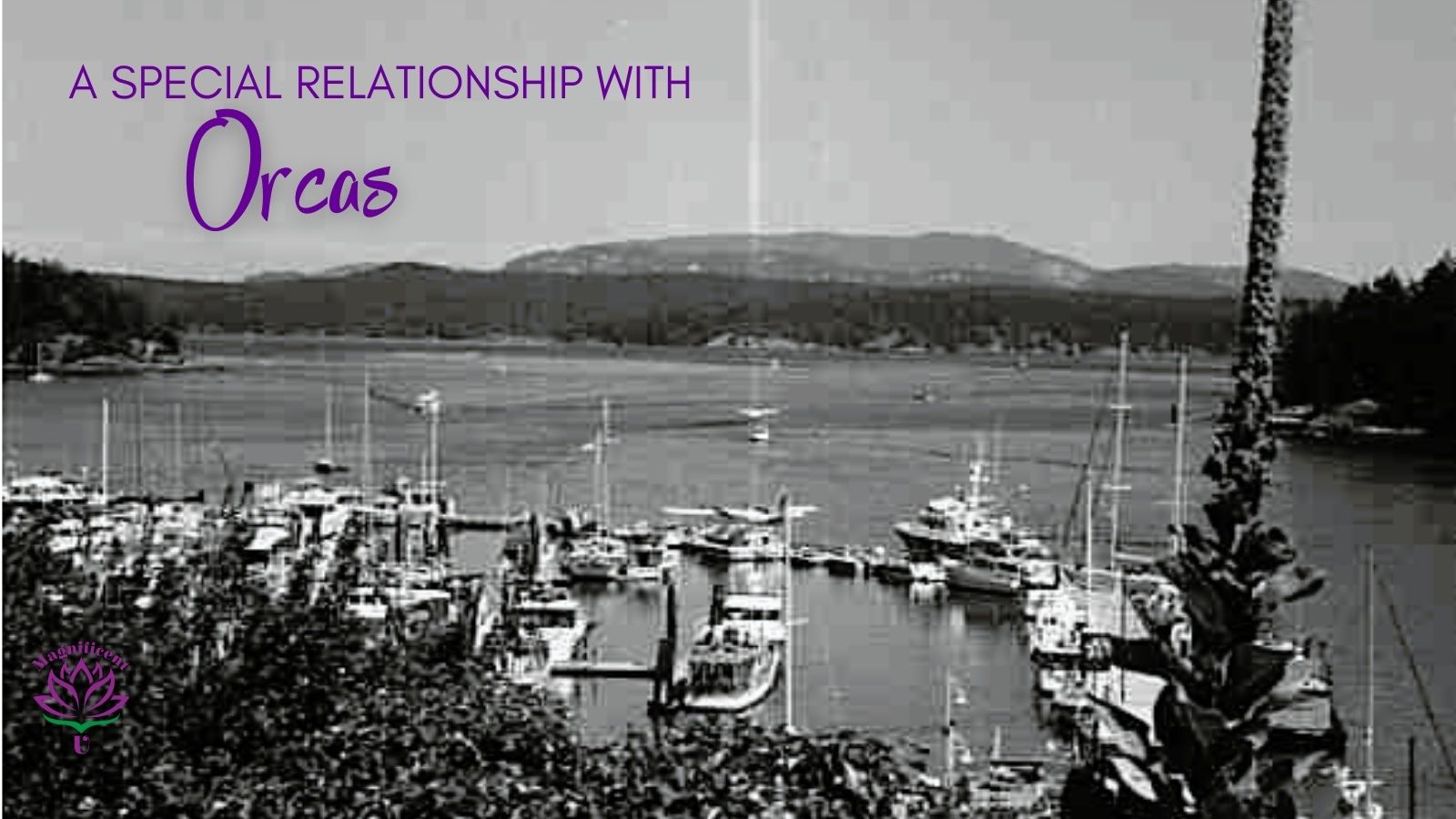 The Pacific Ocean waters surrounding the 170-plus islands in the San Juans are teaming with life. San Juan Island, itself, is a sanctuary where the earth mother shows off all her splendor. There’s only two ways to get to San Juan Island, by air and by water. In one direction there’s a breathtaking view of a snow-capped mountain. In another, Canada is visible. In every direction there is water and islands. There are spectacular sunrises and sunsets. There are lush forests. There’s no McDonald’s – or store chains of any kind. Most of the island has no streetlights. The maximum driving speed is 45 mph. You wouldn’t want to go any faster – you might miss something nature wants to show you – a deer and her fawn, a raccoon, a fox, a wild turkey, any number of water fowl and other birds. Every member of the raptor family has its home here – hawk, raven, bald eagle and even one set of golden eagles.

Despite how wondrous this all is, nothing compares with the awe and wonder, the tear that comes to the eye, the overwhelming feeling of gratitude one feels, when the opportunity arises to gaze upon the Orca (or largest dolphin). Three families (or pods) make their home here. They’ve been diligently scientifically identified, photographed, and studied by the Center for Whale Research. All members of the pods are named. And as in any small town, everybody known everybody. In this town, the humans and the Orcas are no different.

Practically everyone has a boat. And, almost everyone knows the Orcas by name. It’s easy to tell which Orcas are male and which are female – by the size and shape of the fin. Orcas have a unique mark behind their fin – called a saddle patch. Just like you know your friends by their face – we know the Orcas by their saddle patch. And, they know us. They recognize the boats and the people.

Their return each year is highly celebrated and anticipated. Most of the island residents know a lot about the Orcas, like you would of any of your neighbors, including when they come home for the summer. There is an informal phone notification system by water and land. The moment the first Orca is sighted each spring, everyone on the island knows. There is excitement and joy, that dear friends have returned to share our life for awhile. This daily phone calling about which whales are in, who had babies, who didn’t make it back, continues for several weeks until all 3 pods have returned.

People who don’t have boats somehow manage to convince their friends to take them to see the whales. Or, they drive to the West Side of the island, park their car, and walk to a cliff or hill overlooking the water. I’ve seen as many as 30 Orcas while sitting on a favorite hill. No matter how many times you’ve seen them, the thrill never goes away.

Just like being concerned about the lives of our family and friends, we feel the same for our neighbors, the Orcas. We mourn their deaths and celebrate their births. We worry about boat traffic and too many people getting too close. And, we feel the pain when one is in prison for no crime committed.

In the early 70’s, these 3 pods of Orcas went through great trauma. Marine parks wanted Orcas. Boats and explosives herded them up, many died, many babies were taken from the ocean and their families, put in small tanks with no other Orcas, and taught to perform for dead fish. Finally, laws were passed forbidding these captures off the State of Washington. However, it’s still going on in Japan.

There is a very special Orca still in captivity that came from these 3 pods off the San Juans. Her name is Lolita. She’s in Miami doing 2 shows a day. She’s over 30 years old. She’s been in that same small tank (the smallest in North America) since she was six. 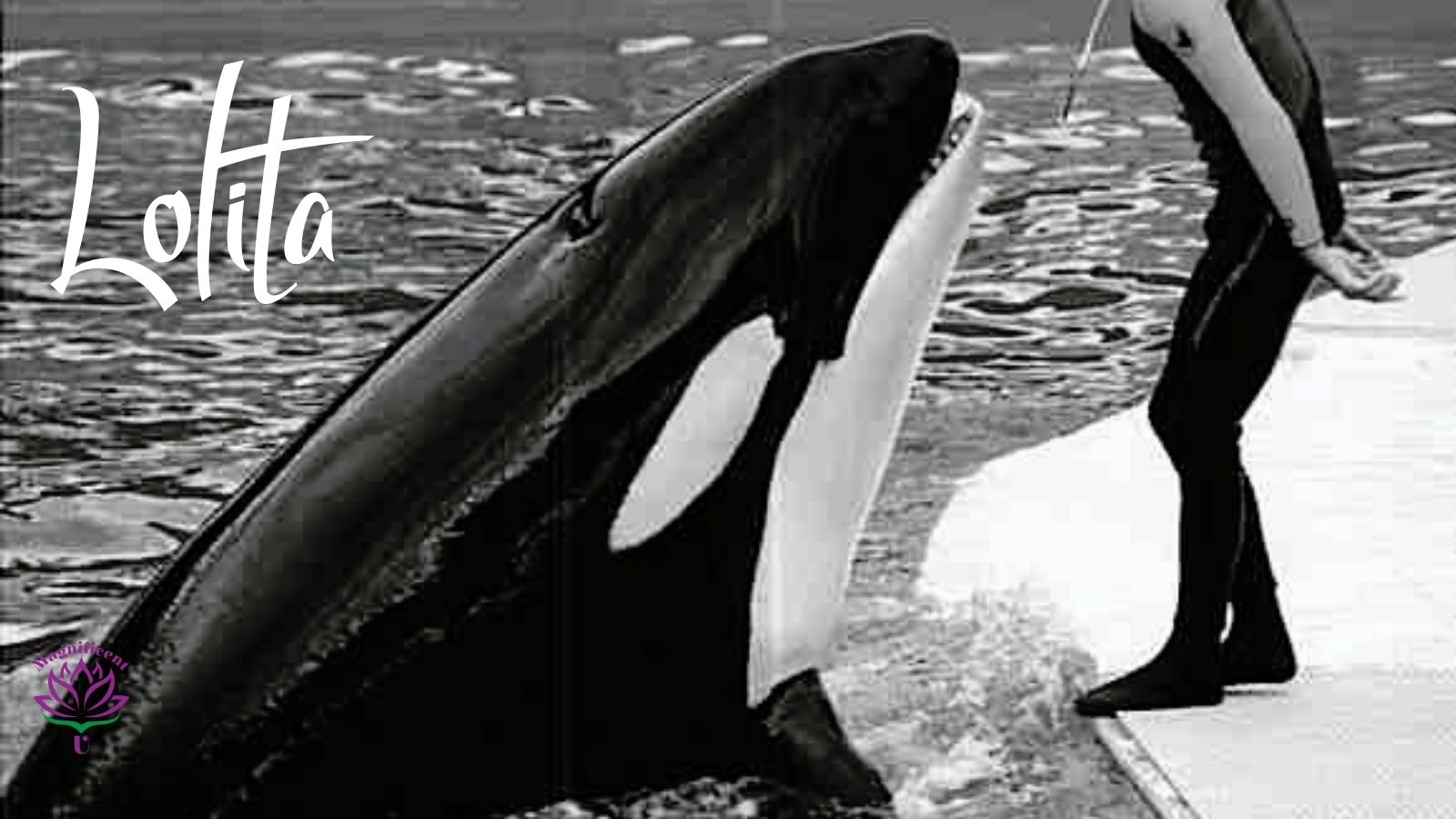 I honor her courage. I had the wonderful opportunity to meet her. It’s amazing that she’s still alive, since the average age in captivity is seven. This is in stark contrast to the 50 to 70 year life-span they experience in the wild. My belief is that most Orcas just can’t handle the confinement, eating dead fish, no one else of their species around – yet, she lives on. There’s an army of people joining together to try to have her returned to her family and the open ocean. I don’t know if she’ll ever be set free. I’ve had to find a place within myself where that’s O.K. Ending dominance over others – people, dolphins, the land – requires that we think and act in a totally different way. We must first figure out how to totally love and free ourselves from the prisons we have created with our limiting beliefs, fears, and judgments.

Watching capture scenes, whales struggling in nets, mothers and babies screaming as they are being separated, babies drowning, tears running down my face, I’ve had to ask what would an evolved being do here? What would Ghandi, Christ, Buddha, Mother Theresa do here? They would love unconditionally. They would not judge. They would feel love, not anger. It’s not easy! I believe Lolita has a personal mission – why else would she still be alive? Conversations about her have united many people, have provoked much thought, have facilitated much personal growth, and have inspired freedom within humans.

When I first began to meditate, dolphins started appearing in my meditations. Each time this happened, profound emotional healing took place. I had been having these experiences for quite some time when I heard Lolita’s story. She is the primary reason that I left the corporate world, as an Industrial Engineer, and moved to the San Juans. I spent a year there – learning about Orcas and communing with Lolita’s family. I participated in the Lolita Symposium sponsored by the State of Washington Governor’s Office, cofounded a non-profit for whales and dolphins, and flew to Miami to visit Lolita in captivity. I made a commitment to the dolphins and whales to help raise awareness and to tell Lolita’s story.

My connection with dolphins – and Orcas in particular – has positively impacted my life in numerous ways. They are available to assist you in your personal and spiritual growth journey as well.

Return from A Special Relationship with Orcas to the Magnificent U Energy Healing Home Page.