A Magical Journey to Yogaville, Initiation, New Energies and More 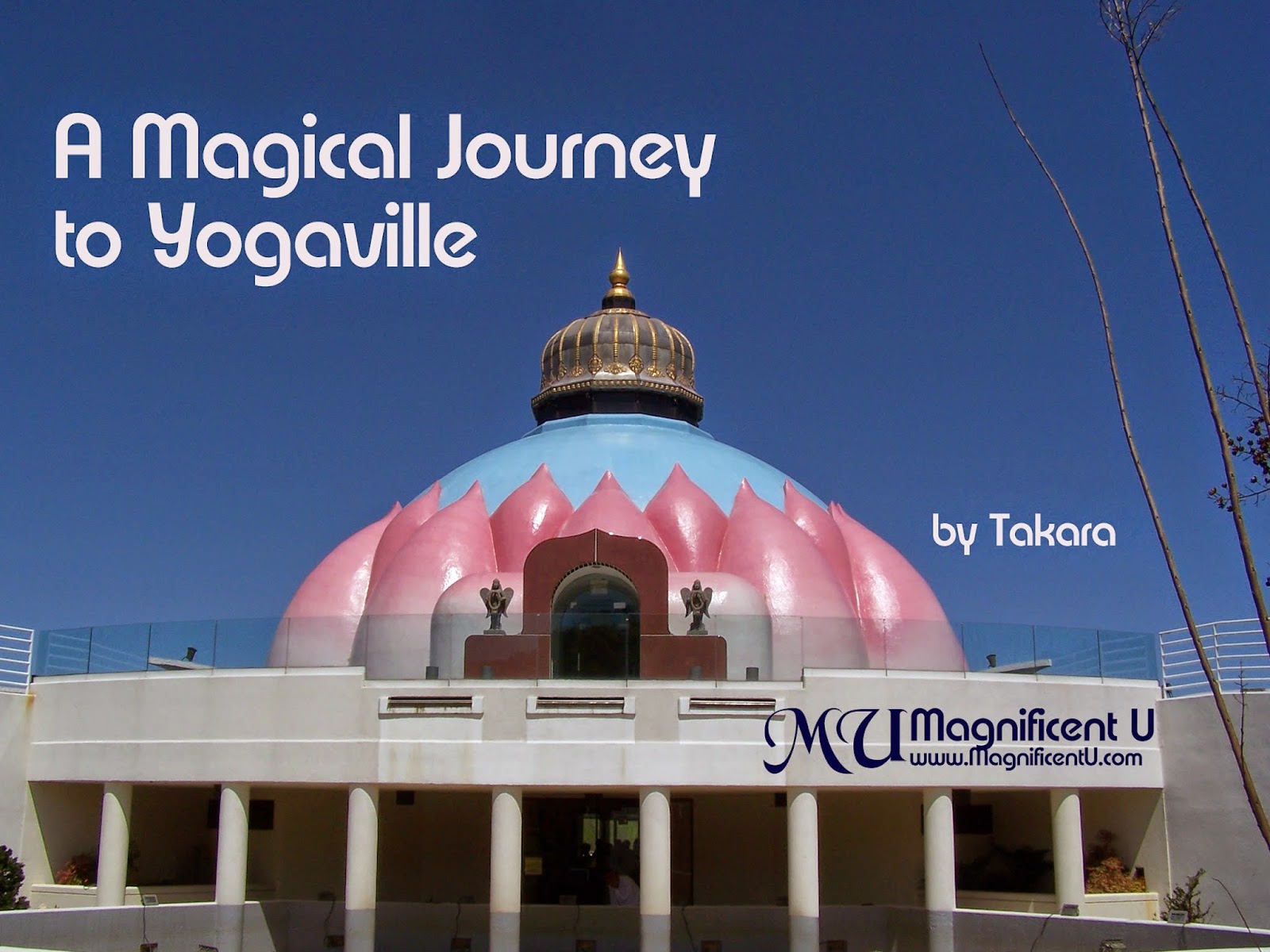 Sometimes I feel so blessed tears well up in my eyes. The last few months  have been so full of wonder that I’ve been moved to tears on more than one occasion.

The story I’m about to share includes a fairly profound transformational experience. May the energy of this event touch and empower you as well.

Since returning from Fiji about a year and a half ago, my life seems to be flying past at lightning speed. Days and weeks melt into one another.

As I was finishing up the writing of Peering Through the Veil, I was also writing the first half of 2 of the books in the New Dance series. The first is about Awakening. The second is what I term The Platinum Principle. I know that the energy and information around this principle is one of my primary purposes for being here.

Who I am and what I do requires that I continuously grow in consciousness and awareness and move ever higher in vibration, becoming more and more the voice, energy, and embodiment of the Divine Feminine. In order to do that, I often am taken through wild experiences and energetic shifts.

People I don’t even know sometimes send me crystals and gems. When I was living on the yacht in Fiji, a woman I’d never heard of from Israel contacted me by email. She began sending me the most amazing dragon jade beads and other rare stones as soon as I got back to the states. I’ve created energetic elixirs with each of them. Later in the newsletter, you’ll read about what wonderful product several of them ended up in.

For years I’ve been jolted awake in the middle of the night with inspiration to create something or write something down. I’ll be in the middle of working on the computer or having a conversation, and I’ll get an intuitive “hit” to google something or go somewhere. I pay attention to every one of these little “whims” that others might not even notice. Each time I follow the inspiration, and each time I invariably come across an important bit of information or I meet someone with another piece to the puzzle.

Its as if every experience I’ve ever had, every bit of information I’ve learned is a thread. As I follow these intuitive promptings, the threads are being pulled together creating a beautiful tapestry. Each thing fits beautifully with everything else. Things from the past and the present that seem completely unrelated, turn out to be equally important in whatever I’m being guided to create or understand.

Its a truly magical process and I’ve learned to simply trust. There is no way that I could ever figure out what’s about to happen, so I’ve stopped bothering to try. I just follow the little whims and watch in awe as things unfold.

Several weeks ago I received an email from my dear Sister of the Heart, Andi Goldman. It was such an honor to have her write the forward for Peering Through the Veil.

My relationship with Andi is very much like my relationship with Millie Stefani and a few others in my inner circle. It can best be described as love at first sight. Not a romantic or amorous type of love. But the kind between sisters. Yet not the kind from blood relatives, but a sisterhood that stretches back over eons. When you encounter one another there is such a love and a recognition of “knowing” the other that your heart literally sings. When Andi and I get together, we sometimes get so giddy in one another’s presence that we just seem to smile all over and giggle like school girls. It is deLightful to be in her presence.

Anyway, with our schedules we rarely get to see one another or even have the opportunity to talk on the phone. So it was wonderful to hear from her by email.

In the message she invited me to Yogaville for a weekend workshop that she and Jonathan were giving on Chakra Frequencies and The Divine Name. I had such a wonderful time 2 years ago when they were there before.

At first I didn’t think it was something that I could fit into my schedule. But as it got closer to the date, I suddenly felt absolutely sure that it was something I really needed to do. I realized it was on Wesak weekend. I couldn’t imagine being in a better place for the energies of Wesak than with my dear friends Jonathan and Andi at Yogaville.

Yogaville is an ashram in the rolling hills of Virginia that was established by Sri Swami Satchadananda. I’m not sure how many acres it covers, but there is a lovely main courtyard with buildings all around that include housing from private rooms to those that are shared, a bookstore, a library, administrative offices, numerous meeting and yoga rooms, and a large facility for shared meals and evening presentations. A bit away from this complex is the famous Lotus Light Shine which is an architectural marvel that looks literally like a Lotus.

I arrived on Friday and checked into my room. I ended up in a room with 2 bunk beds and a shared bath across the hall. Two other ladies shared the room with me. They were both attending a different workshop so I rarely saw them throughout the weekend.

The workshop was beautiful, engaging, and uplifting. I love moving energy with my voice and Jonathan and Andi are so wonderful at teaching people how to do that. The energies build all weekend until everyone is totally buzzing with energy by the time its over on Sunday.

When I attended the workshop 2 years ago, I quickly developed a friendship with a woman from North Carolina who was also taking Andi and Jonathan’s workshop. We spent the entire weekend talking during breaks and walking together to meals and to all the workshop sessions.

This time, even though I was in a shared room, and I talked to several people during the meals, I didn’t feel I was really connecting deeply with anyone. It felt kind of odd not really having anyone to share with while I was there.

Whenever I am with Jonathan and Andi when they are teaching a workshop, I try to stay very conscientious of their time and attention. I know what its like to keep a workshop going session after session. It takes a lot of energy and focus, so I try not to monopolizing their time. We talk briefly before and after sessions, but typically that’s it. So I was pretty much on my own.

By Sunday morning I was beginning to wonder why I had needed to come. The class was wonderful and seeing Jonathan and Andi is always such a blessing. But neither accounted for the intensity of my knowing about my need to be there.

I saw Jonathan as I was getting breakfast. I was about to sit down to eat when Jonathan came over and whispered in my ear. He asked me what I was doing at 3 p.m. He and Andi were doing a special ceremony at the Ashram and were only allowed to invite 2 guests to attend. They wanted me to be there.

I whispered back that of course I would be wherever they needed me to be at 3 p.m. I’d already checked out of my room and had no plans once the workshop ended around noon. As he walked away, tears welled up in my eyes as I finally understood why I’d been compelled to be there that weekend.

At the close of the workshop, Andi introduced me and personally handed samples of the Divine Name Essence out to each of those in attendance. I shared a little about the Dancing Dolphin products and the collaboration Jonathan and I have with the Essence of Sound product line.

Several of the people who took the workshop asked me questions about the products during lunch. And I finally felt like I made a new friend that lives pretty close to where I live.

One woman suddenly asked me if I ever made gem essences. I told her that I’d made over 70 crystal and gem essences and I was always making something new.

She said she had this amazing chimera – a naturally occurring crystal made of  ruby, spectrolite, and hemitite – and would love for me to make an essence out of it. I started asking her questions trying to determine how to get the crystal in order to make the essence. It turns out that she had it there at the Ashram. So we went to her room and she handed me the 3 lb. sphere. Here this woman was giving me this outrageous stone to take home with me and I didn’t even know her name. Obviously we exchanged contact information and I wrapped it safely inside a very fluffy beach towel I happened to have in my trunk.

I later did a google search and discovered that chimera was only recently found in a remote location in Tibet and is only available in limited quantities. Her sphere is truly a fabulous stone. The day I got it was Wesak. After the ceremony with Jonathan and Andi I took it home and placed it in sacred water to begin the essence creation process.

Andi, Jonathan, another friend of theirs and I were met by three of the residents of Yogaville for the ceremony. We entered a special candle-lit room at the Ashram and for the next 2 1/2 hours we sat facing one another toning, singing, humming, sometimes in silence and occasionally giggling. The geometry and acoustics of the room combined with the energies of those present and was enhanced by the energy of Wesak. What was produced was a truly extraordinary, life altering experience. It feels like I’ve jumped a couple of octaves from that experience alone.

Whatever happened that day, on all the levels that it happened on, I may never truly understand. I do know that the “tuning” and upgrade I received was necessary in order for me to create the Essence of Oneness you can read about in another post from this month’s newsletter.

Wesak and the solar eclipse in May, the lunar eclipse today, the venus transit this week, and summer solstice coming up are all blasting with new energies. Ride the waves and use the energy to go further than you ever have before!

Return to the Magnificent U Human Potential Home Page

Follow Me
Takara
Author~Speaker~Engineer~Mystic at Magnificent U
D. Takara Shelor is a bestselling author, award-winning speaker, engineer, and consultant helping individuals and organizations discover their true magnificence so they can thrive in business and in life. She acts as a catalyst and facilitator of radical positive change providing tools, training, and support to people who are tired of feeling suck and are ready to catapult themselves into high gear both personally and professionally. She says, "Life is a magnificent adventure ... remember to enjoy the ride!" Get her free 7 Secrets to Dancing Through Life EmPOWERed, EnRICHed, and Living in Joy ebook to join her email list by visiting her gift page Enjoy Takara's Magnificent U Bestselling Author Blog: Magnificent U

Takara is a highly-intuitive bestselling author who helps people achieve their highest potential personally & professionally. She assists them in rising in consciousness and awareness, healing from the trauma drama of their past, and steping boldly into their true magnificence. Get started now by getting the free ebook below.