You are here: Home1 / Blog2 / Personal Empowerment Happiness3 / 9 Things You Must Overcome to Manifest Your Desires & Live a Joy-Filled...

Every personal empowerment workshop, every coaching program, every energy healing session, and every shamanic healing experience, should have as its aim a way to help you identify, heal, and release these 9 things that you must overcome to manifest your desires and live a joy-filled life.

I call them the “9 Deadly Sins.”They each represent a way of thinking and believing that do not serve you. These ways of perceiving and viewing the world keep you firmly trapped in the life you are currently living. They keep you from becoming the best version of yourself and from having, doing, and experiencing the things you desire … no matter how much you visualize, pray, or how hard you try.

You can’t take all the blame for these 9 disempowering ways of thinking. You’ve been brainwashed since birth to believe much of it to be true. 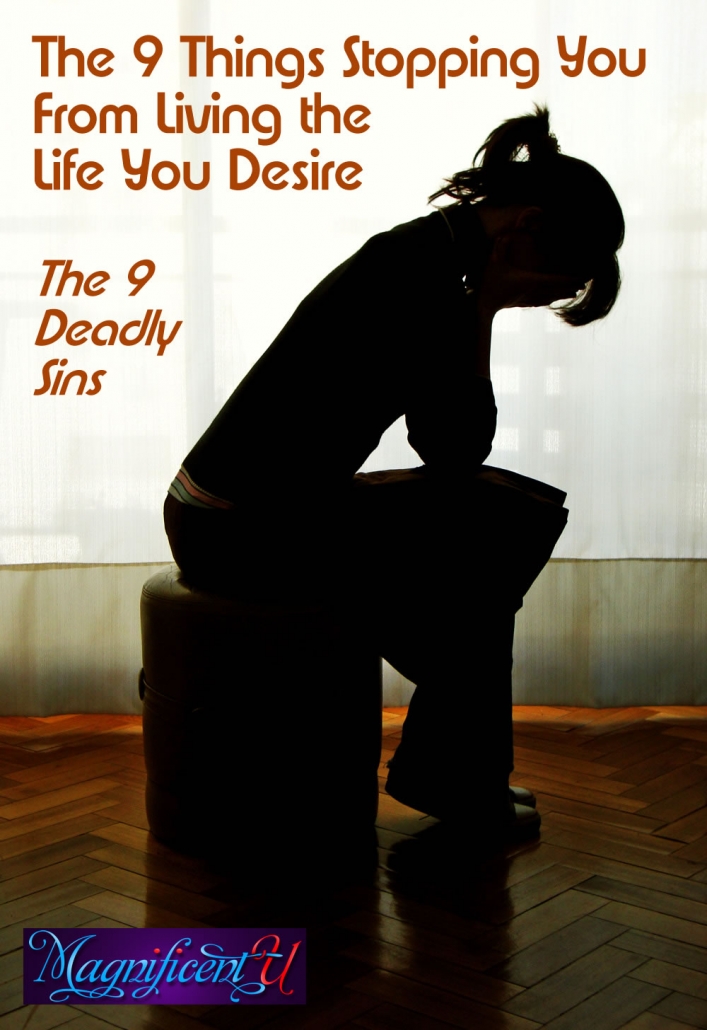 Some you made up on your own – mostly through trauma drama moments.

But much of it was passed down through your DNA from your ancestors.

And then, as soon as you were born, whatever beliefs, superstition, or dogma your family believed, they began teaching it to you. Depending on where you live in the world and whatever training you received in school, in religious studies, in social circles, at home, with your friends, through television, news, books you’ve read programs you’ve watched, pretty much everywhere you go, you take on beliefs whether or not they are actually true.

Most major religions have a teaching in there somewhere that says God prefers men over women. So the majority of people born female automatically face significant worthiness issues. The Inquisition didn’t help. Fear of displeasing God is a paralyzing fear for many. And, like I mentioned earlier, these fears are literally passed down through the DNA. It’s now been proven scientifically.

Of course, God does not prefer men over women. The Divine Creator, by whatever name, has no favorites. You can get into alignment with Divine flow or you can stay stuck in mediocrity and struggle (because of the 9 deadly sins) and be out of Divine flow, but the Universe, All that Is, Great Spirit, God, Allah, loves you regardless.

You are a spark of Divinity having a human experience. You are an emanation of Creator. So, of course, Creator loves you.

In the ancient religions passed down through generations of fearful superstitious people, the belief is that the Supreme deity requires sacrifice and is highly judgmental. Certain religious institutions teach that you must do certain things or you will be damned for all eternity. What an extraordinary level of control and financial abundance that has successfully created for religion.The Divine delights in its creation …. of which you are part. You are loved and worthy every second of every day by your mere existence … regardless of your gender. There is nothing to prove, become, or do required. It’s a huge hurdle of beliefs to move past and often requires support of some kind. But the level of freedom and flow made available to you when you embrace the notion of appreciating, honoring and aligning with the Divine out of love vs. fear is monumental.

Fear and limiting beliefs are only two of the 9 things keeping you from manifesting your desires. So, what about the rest?The 9 Deadly Sins (the Things you Must Overcome to Manifest Your Desires)

I could talk all day about each of these things. But the bottom line is we all have most of these running in our subconscious mind. That is where all the real work is to grow and evolve personally and spiritually, to find your joy, to find fulfillment, to have meaningful relationships and a career you love.

In this interview, I discuss some of them in more depth. I also talk about MANY ways to address all these issues:

If the interview, I talk about the power of meditation and how powerful it can be in shifting out of these 9 Deadly Sins. Get my 2 free Guided Meditations to help you achieve the theta brainwave state I mention in the video.

Have a beautiful day,

I Crashed and Burned So You Don’t Have To!
Scroll to top