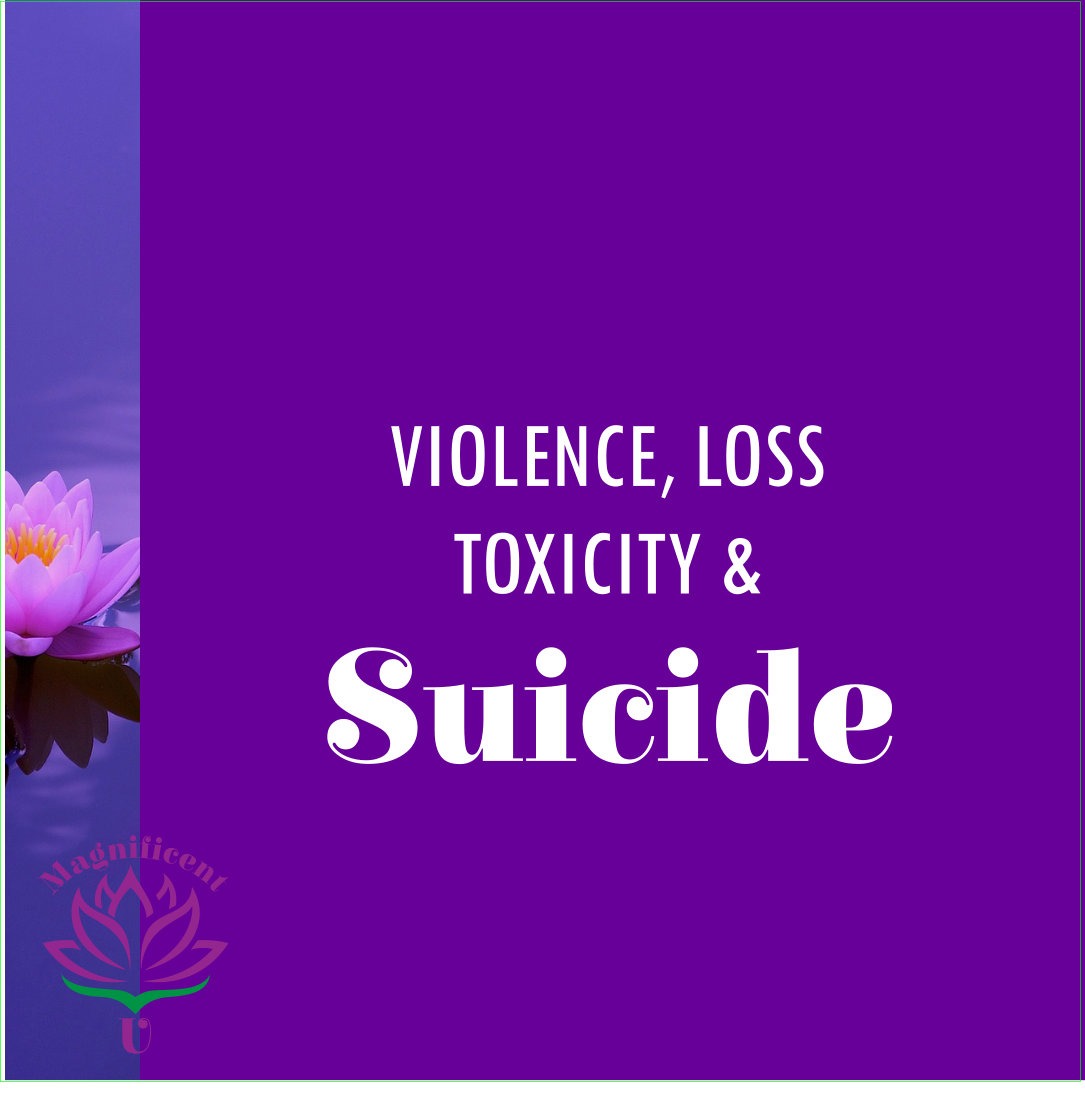 There is a lot of talk lately about suicide and the potential causes. I believe there is a significant connection between violence, loss, lack of unconditional love, toxicity and suicide.

There are a massive amount of drugs and toxins people ingest every day without doing it on purpose. It begins with the fluoride and other toxic chemicals added to municipal water systems. There is a massive number of drugs in tap water (water treatment plants have no way to eliminate any of the drugs anyone takes that eventually ends up literally “down the drain.” Cocaine, meth, all the ADHD drugs that have suicidal tendencies as a known side effect, etc. etc.).

Look at all the lead poisoning from tap water showing up in so many municipalities. We know this negatively impacts the brain.

Glyphosate (RoundUp) is a known carcinogen and yet people everywhere spray it all the time. Many medical professionals are recognizing that it is the glyphosate and not the wheat that is causing people to be sensitive to things that contain gluten. When the body is in physical imbalance and reaction, it can cause all sorts of things to go awry .. including the mind and emotions.

Mercury fillings are commonplace. I personally believe the toxicity of these is even passed down to the child from the mother. Evidence is now pointing to the negativity of mercury being aggravated by wi-fi signals. So those with mercury fillings  have more leakage by being exposed to wi-fi signals which are now everywhere. And we know that mercury negatively impacts the brain.

This is a direct quote from stats about suicide: “In the western world, males die by suicide three to four times more often than do females.” Is it because they are treated differently from the time they are young … expected not to cry in many households for example?

We know one way they are mistreated is by circumcision … which is a form of severe abuse in infants. It is deeply psychologically scarring (proven scientifically). There is a study in one country where 90+% of the violent crime is done by males who are circumcised vs those who are not (which is a much higher number in that country). Violence is just another form of mental imbalance … just like severe depression and suicidal tendencies may be.

I just heard a statistic recently that 1 in 4 of the kids on the street are gay, who came out to their parents, and were literally kicked out of the house. That isn’t love. And if they are willing to ostracize a child over this, there are probably many other ways in which the families show love that is “conditional” vs unconditional. One must “conform” and act as expected … which creates a significant amount of stress.

We can also look at diet. They have done studies giving mice the “great American diet.” (I DO NOT condone animal testing, but this one already happened.) Mice who ate white sugar, white bread, and white rice literally became cannibals because they were not getting the things they needed to survive. Fast food restaurants, FAR too much sugar, pastries, etc. means most children and adults in America have severe malnutrition issues. When you don’t feed the body what it needs to function optimally, the mind is affected. There is a whole book called The Sugar Blues, or something like that.

Then we have to consider sexual and other abuse: Studies by David Finkelhor, Director of the Crimes Against Children Research Center, show that:

“Over the past 10 years, more than 20,000 American children are believed to have been killed in their own homes by family members. That is nearly four times the number of US soldiers killed in Iraq and Afghanistan. The child maltreatment death rate in the US is triple Canada’s and 11 times that of Italy. Millions of children are reported as abused and neglected every year.”1

This ugly insight continues with the consequences of child abuse:

Another factor is loss and not having any idea how to properly mourn and heal from loss. “Out of all suicide deaths worldwide, the researchers estimated that 1 in 5 are tied to unemployment. That adds up to an estimated 45,000 suicides each year. And both men and women—no matter their age—are at an increased risk when they find themselves out of work.”3

More bad news: According to Julie A. Phillips, Ph.D., professor of sociology at Rutgers,”Divorce rates are rising and marriage rates are falling, resulting in more people living alone; obesity rates are climbing, along with associated health problems; and the lousy economy and unstable employment prospects certainly don’t help. ‘All these forces may combine to affect psychological well-being and stress levels, and to enhance feelings of social isolation.'” Again, addressing these issues requires understanding and healing from loss. 4

With all these factors, its no wonder the suicide rates are high.