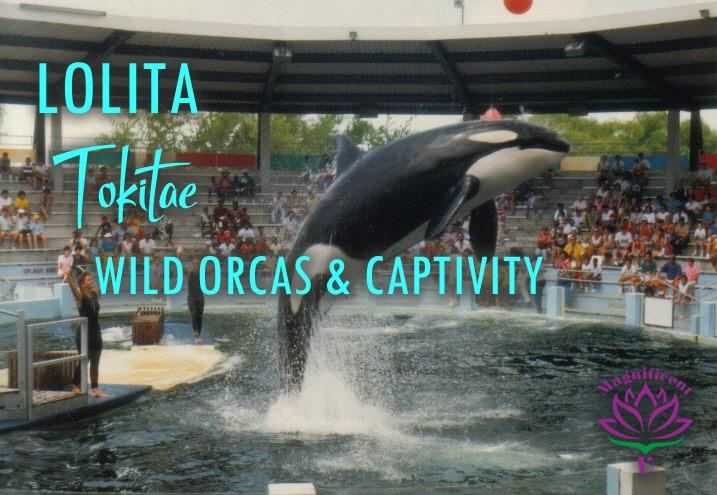 Someone mentioned that they had met Lolita. I went to see her at Miami Seaquarium back in 1996. I had co-founded a nonprofit to help get her released, it seemed appropriate to meet her.

Wow did we have an encounter, even the trainers all noticed. We ran up the entrance as soon as they allowed people to file in for the show and we stopped at the tank and just stood there. She came over to us, my two friends and I, and she just stayed there beside us until we absolutely had to be seated. She would duck her head under occasionally but then come right back up in the same position. Throughout the show, the trainers kept looking over at us in the stands, even pointing at us sometimes .. I can only assume that she was behaving differently than normal because we were there. She “knew” us and we “knew” her … we lived in the San Juans where her family lives. We had been sending her love for ages. Heck, I even quit my job as an engineer in pharmaceuticals manufacturing to move to the San Juans and co-found a nonprofit designed to get her home. Being in her presence was a blessing. But I so wish going to see her there had not been necessary. I wish she had lived her whole life with her family in the San Juan Islands.

The thing I disliked most about being there was the noise of that bloody tank … The ladies room was down underneath (I can’t remember exactly), but it was really really loud in there from the motor noise of whatever the water system was. I can only imagine how uncomfortable it was for the animals whose ears can hear far more than ours can. In the latest reports, she is already or is going blind. No matter how well she is or was treated, taking a magnificent sentient creature out of open water where they swim 100 plus miles a day, away from her mother and her family in a matriarchal society when she was very young, and sticking her in a tank that is the freaking smallest in North America to eat dead fish and perform circus tricks is beyond cruel. It brings up deep sorrow just thinking about it.

I can’t even watch the capture scene which I have on a VHS tape. According to John Crowe, the young diver they hired to put her in the sling, when they were corralling Tokitae (later named Lolita by her “owners”) into it, all the other orcas lined up and began screaming. He said it was so very loud. As soon she was lifted out of the water, they all stopped screaming simultaneously. He said the silence was deafening. I saw him tell this story in my living room and in front of groups and he had tears every single time. He had great remorse for his role in her enslavement. And he spent the rest of his life working to help her get released.

D. Takara ShelorHomeschooling – a Powerful Positive Education for Your Child(ren)
Scroll to top