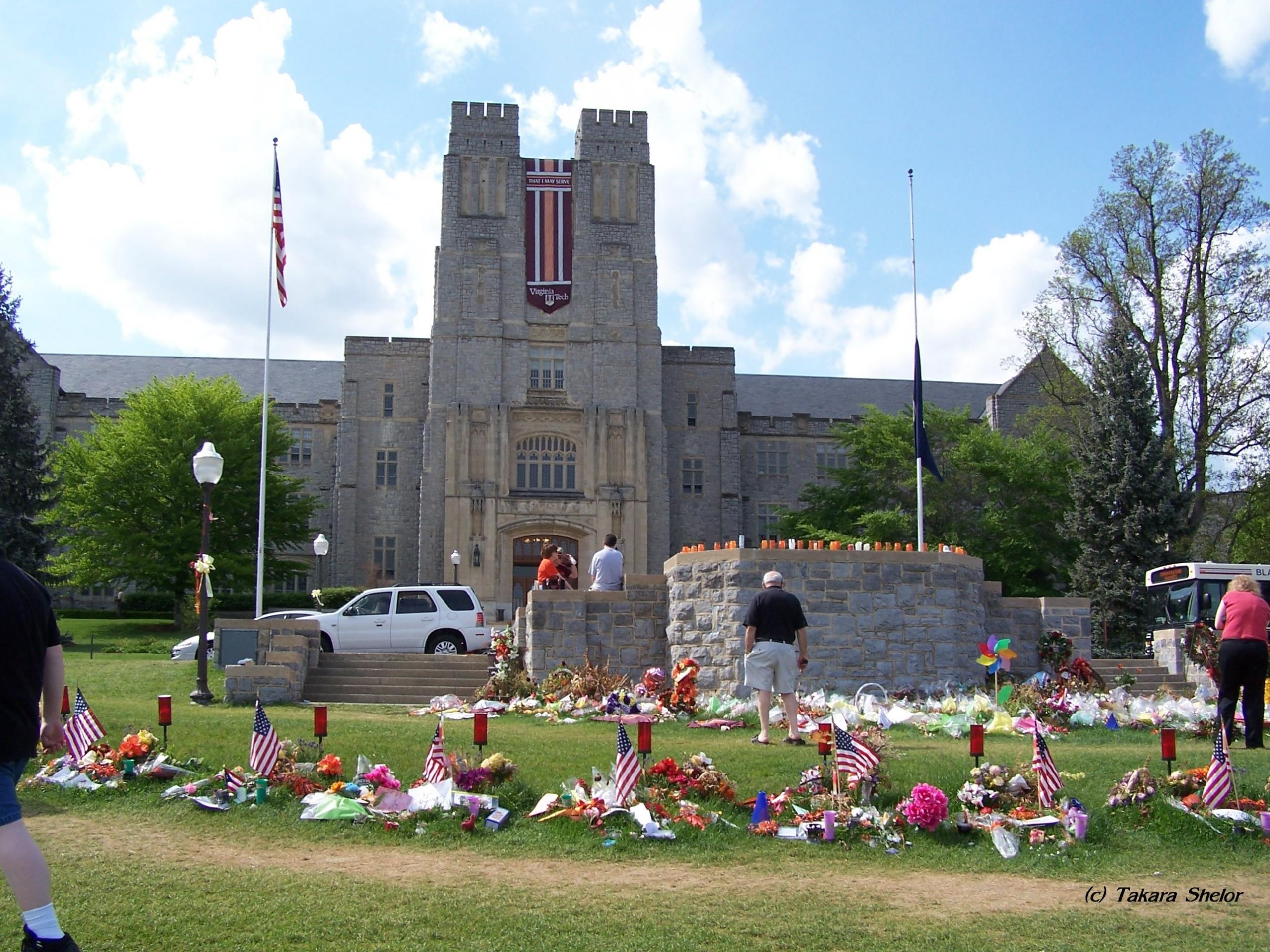 What an unexpected moment I was in.

For weeks I’d been feeling like I needed to visit my family in Virginia. Not knowing why, but having an inner knowing that it was very important, I finally booked the airline reservation.

The timing of the trip suddenly made absolute and horrifying sense in light of the Virginia Tech tragedy.

Fast forward to the actual visit a few weeks later …

While visiting the Virginia Tech campus, I was flooded with memories, insights, and sadness.

How many times had I walked down that sidewalk? Across the drill field? Through those doors?

The answer was always … “Way too many to count.”

I can’t fully express in words the impact that Virginia Tech had on my life. I was a young, passionate, dream-filled girl when I first stepped foot on that soil. By working there and putting myself through school there, I blossomed as an individual.

I found myself reliving those passions as I sat on a park bench near the duck pond overlooking one of the most beautiful college campuses in the United States.

Before my Virginia Tech days began, I was working full time as a receptionist at a doctor’s office and attending classes full time at night at two different community colleges. I was planning to major in Business Administration. I was making A’s in all of my classes and actually getting really bored with that major.

Then one day I had an interview to be a secretary at Virginia Tech. There is a giant parking lot that runs alongside the engineering buildings. When I parked my car in that lot, I was so nervous about the interview that I forgot where I parked.

In order to find the car, I finally had to go up to the roof of one of the engineering buildings and look down from above.

Getting that job at VT was the day that my whole life changed.

I began working full time and attending classes at Virginia Tech. And I continued the night classes at 2 Community Colleges. Instead of Business Administration courses, I was taking calculus and other engineering prep classes. I had decided to become an industrial engineer.

There are some amazing things that happen on a college campus:

That is the magic available at a college campus. And it was that magic and hope that seemed completely missing and overshadowed at Virginia Tech that day that I visited after the shooting.

So I acted as an instrument of peace, saying prayers and speaking the “Language of Light.” I dropped fresh flowers in the duck pond while thinking of the cultures that float candles on water as a memorial. And I asked for clearing, healing, and that the icky overshadow be dissolved and that the magic return.

Because hope should be the predominant theme on every college campus.

This campus had certainly given me that. I was on top of the world when I graduated from there with a degree in Industrial Engineering so many years before:

And my thought was that Virginia Tech should continue to offer that hope to others for years to come.

Many people from my newsletter list connected in with me that day through prayer and intention as I performed the clearing and healing ceremony.

I had intended to head over to Norris Hall – the location of the shootings – but intuition took me to the drill field (the giant park-like field in the center of campus) instead.

What I found there was a beautiful memorial. A semi-circle of flowers and candles, the names of each of those who died with images, and gifts from friends and family. You can see in the photo I took, that the grass had been worn bare from the number of people who had walked past and read the names through teary eyes – just as I had done. It was impossible to be there without tears.

The day after I visiting campus, I happened to walk past as my dad was watching the evening news and the President of Virginia Tech was on the screen in a cap and gown. I asked my dad what was going on and he said that it was Tech’s graduation.

I was shocked. They were graduating already. The campus would be filled with thousands of families and friends and I’d been guided to visit the campus the day before and literally “clear the space.” I felt immensely blessed and that perhaps in some small way my actions had somehow made a positive difference.

And now on to the next part of the mission . . . to visit Jamestown and Washington D.C.

Ever Feel Like You Will Never Have the Things That You Desire?