Conspiracy Theories, Fear, Manipulation, and How to Know When to Walk Away

You are here: Home1 / Blog2 / Spirituality3 / Sixth Sense4 / Conspiracy Theories, Fear, Manipulation, and How to Know When to Walk ... 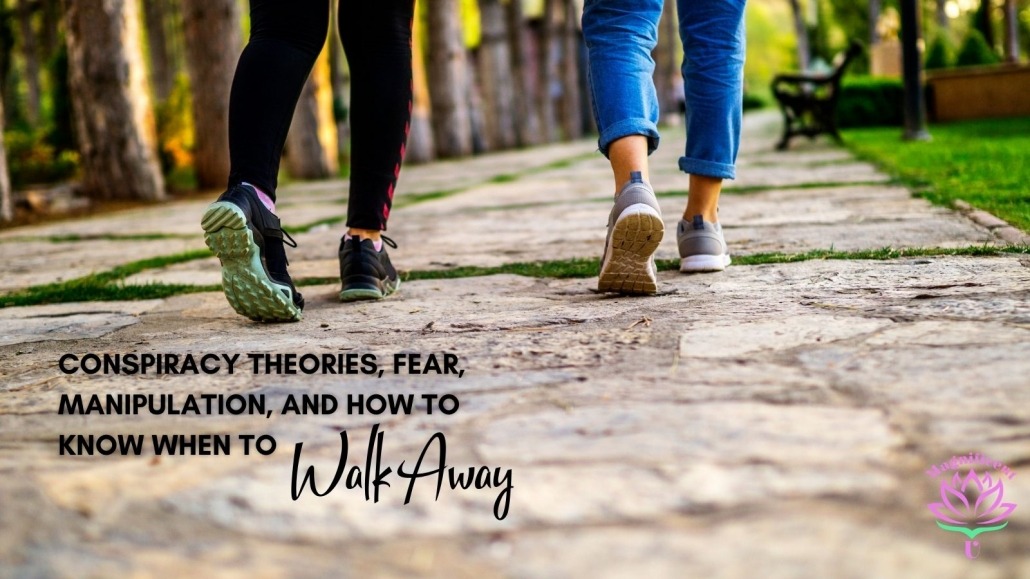 I saw something on Facebook related to 9/11 and the events surrounding that day. http://consciouslifenews.com/911-prove-airplane-hit-pentagon-major-general-albert-stubblebine/1145271/

For some unknown and often perplexing reason I have been a magnet for this sort of thing for many years. Chance encounters with complete strangers, knowing and sometimes even dating men who were special forces, others coming to visit and telling me all this “secret” stuff I’m not sure I ever wanted to know, their heart-felt accounts of some crazy situations and events most people have never even heard of.

There is a dance involved in knowing certain things. Go into anger and fear or rise above it all.

I have come to the place within myself where I know that all is as it should be. The times we are in are forcing the things that were once hidden to now be surfaced and revealed. Sitting in judgment and anger is not what I am here to do.

Developing the ability to “know” when something is true and when something is not by fine-tuning intuition and “feeling” or tuning in to things is a skill worth developing. It has taken many years to perfect that knowing. And it can not operate when you are attached emotionally or are having an emotional reaction or judgment to the information being presented.

When we become an observer of the world and our own life, we step out of the picture long enough to gain a new perspective. Then, from the place of being centered and balanced, we are Divinely guided with actions to take, places to be, and conversations to have.

Shouting about conspiracies on the rooftops does nothing. Saying the one “right” thing at precisely the right moment to the right person can cause huge houses of cards to come falling down.

The law of cause and effect ensures that those who mistreat others will be mistreated – often ten, one hundred, sometimes even one thousand fold. It works much like tithing in that way. You do not need to seek vengeance as those who cause suffering ALWAYS suffer greatly in the end.

What you do to another, will be done to you. So even though others do awful things, it is not my job to do harm to them. I may be asked to stop them, to draw attention to what is happening that is unkind, unjust or unfair, but I am not the one here to judge their actions or decide about their punishment.

The U.K. to Censor Esoteric Websites

Takara Shelor It is Now Time to Open the Gateways to the Soul of the Whales and the Dolph...
Scroll to top