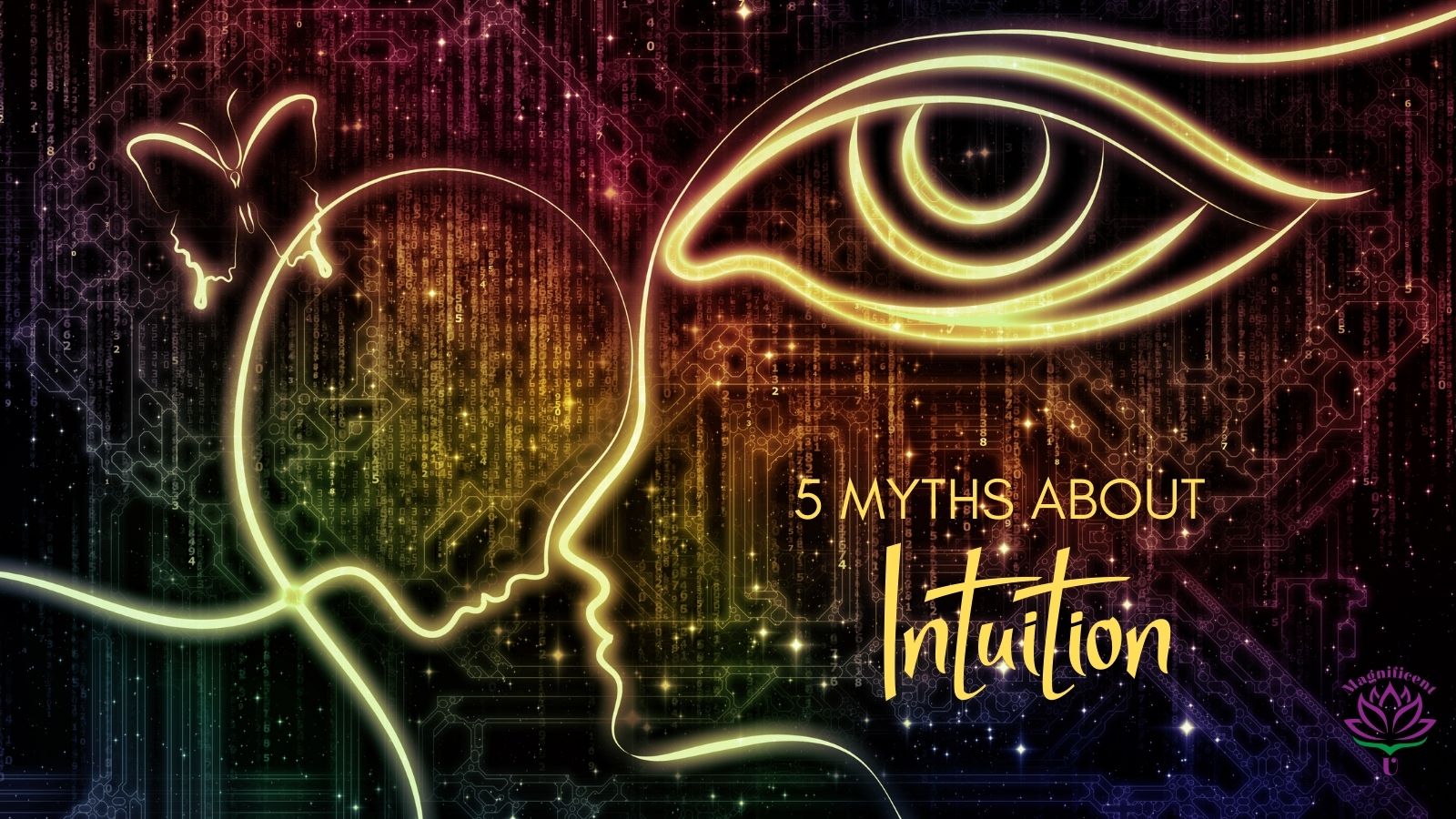 Intuition myths abound in New Age communities and online. Intuition is one of those abilities that even those who knowingly have it and use it don’t necessarily understand very well. There are also many forms of intuition. Yet only three or four are typically discussed or accessed by most people.

If you’ve read my latest book, Unleash Your Future, then you know that intuition is one of 5 key factors in achieving any dream. In it, I discuss the importance of intuition at length and offer a few ways to enhance and fine-tune it.

For decades, I’ve been successfully utilizing intuition in pretty much every aspect of my life and business. And I’ve helped countless others do the same … from spiritual seekers to business owners and entrepreneurs.

Like I’ve already said, there are a LOT of myths out there. So, in this article I want to share with you some of the biggest intuition myths and provide information to dispel them.

Myth #1. Empaths/intuitives are just paying attention to body language and are picking up visually what is going on with another person. Yes, of course, there are people who can read body language. But that is not at all what we are talking about when we say intuition or empathy.

Intuitives and empaths can literally feel how another person is feeling. They can pick up on the fact that someone is angry, judgmental, sad, happy, is trying to take advantage of them, etc. And that is true even if the person is the greatest actor in the world and pretending to be something else entirely. For example, someone might smile and give you a complement. If you can access a particular form of intuition, you know immediately if it is genuine or not.

Myth #2. Only certain people can be intuitive. Even though we call it a gift, it is actually an innate ability we all possess. All 10+ forms of intuition are built into your very DNA. Those abilities are just lying dormant in most people. There are many ways to awaken, activate, and amplify intuitive abilities so that you can utilize them for your benefit.

On more than one occasion, a person in one of my classes or having a session with me suddenly could hear clairaudiently. The ability switched to the “on” position and that ability has continued ever since.

Myth #3. Intuition and psychic abilities are the same. A fair number of people will probably disagree with me on this one, but I believe they are different skills. I am of the opinion that the psychic is picking up information in the person’s energy field. Whatever the person has been doing physically (exercising or not, eating “right” or not) and focusing on mentally / emotionally (even subconsciously) creates energies, symbols, and patterns to form in the energy body. There can also be things in the energy field that came from other people (both beneficial and detrimental). These energies, symbols, and patterns can be “read” by a psychic. They represent outcomes that are likely if they don’t change something … sometimes in a radical way. These tend to be mostly third dimensional in nature. Intuition on the other hand, is often multi-dimensional and can encompass far more than this third dimensional experience.

Myth #4. Intuition is nothing more than extreme logic or logic that is a few steps ahead. Intuition is far beyond logic. Intuition, at least the way I experience it, is knowing things you could not possibly know with the logical mind. It comes in the form of a prompting to call a particular person, an absolute knowing that you need to go somewhere right this moment or at a particular time or on a particular date, the sudden need to stop everything and look up a specific word or phrase, etc.

I “knew” the day I became pregnant. Later on in the pregnancy, I “knew” that my baby was a boy and that he was backwards. There is no way I could know those things logically, and yet I did know them. I never had any medical tests to prove my intuitive hunches about these things. They just all were proven true when my son arrived facing backwards. However, because of the way I gave birth, on my hands and knees in a blow up baby pool, he came into the world face up. 🙂

Myth #5. Intuition communicates loudly and obviously. That idea is far from the truth. Intuition is like a soft breeze that gently caresses your cheek. Unless you are paying hyper attention, you would (and most people do) completely miss it. The prompting to look up a particular person that resulted in my living on a million dollar yacht in Fiji and the South Pacific was just a fleeting thought that crossed my mind as I was busy working at my computer one day. It wasn’t logical to look up the person. In fact, I hadn’t thought of them or seen them in 15 years. But it was the first step in a series of intuitive steps I was prompted to take that led to one of the grandest manifestations of my life … so far.

The insights, healing tools, and modalities I’ve “downloaded” from the Universe to assist humanity contain nothing logical whatsoever, yet people across the globe swear their lives have changed for the better because of them.

On four or five different occasions, my friend, Daniel Jacob, and I brought in the exact same information at exactly the same time. He lived in Seattle and I lived in Santa Fe. We both wrote articles that we “downloaded” from the Universe sometimes. On multiple occasions we published articles on the same day that were so similar it was almost freaky (and deLightful). Either the topic was the same or the example we used to elaborate the point we were making was exactly the same.

Something similar happened with David J. Adams in Australia and I. We each “brought in” guided meditations to heal the oceans and connect with dolphin and whale consciousness. We had never heard of one another. And yet, the meditation I brought in is very similar to the one David brought in … on the opposite site of the world, a few years apart. An intuitive prompting had me contact a particular woman, Barbara Wolf, about my meditation. And it was because of her that I was introduced to David. Now he and I are dear friends and have been co-leading these meditations together for over 20 years.

Join us in the Sacred Circle where you will learn many ways to enhance intuition and a whole lot more!

Takara ShelorWhat Are Your Highest Priorities?
Scroll to top